Nnamdi Kanu And Sunday Igboho: The Difference Is Clear 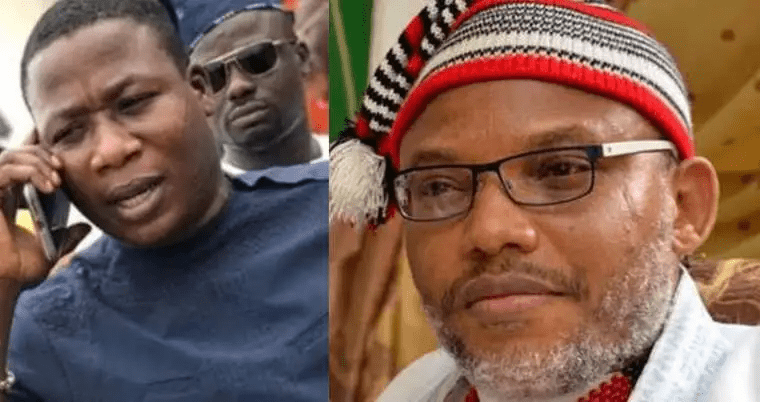 Nigerians are a peculiar people; they are hardly united in seeking the good of the society, rather they sing the same chorus in negative things. What on earth should have made people believe the Nnamdi Kanu and Sunday Igboho are the same?

The only common denominator between the twain is that they are citizens of the same geographical expression called Nigeria and biologically they are both males. Let us look at it in details.

Kanu is fighting a war woven around the fact that none of “his People” has been president of Nigeria since after the great Nnamdi Azikiwe was governor-general in the early sixties of the last century. If today the chief tenant at Aso Rock is from the Southeast, Kanu’s problems will be over. This is because every position in the public service and most of the polity will be occupied by “our people”.

The quick answer to that however is that it does not necessarily need to reach that level before “our people” are in good place. Remember Anyim Pius Anyim-Secretary to the Federal Government during the Jonathan Presidency? The records are there. “Our People” were there without being president.

Now back to Sunday Igboho. His main grouse is that the Fulani who had lived peacefully for decades in areas not their original homes should continue to be good tenants and peaceful neighbours. They should not attempt to confiscate or forcefully take over land and properties that are not their own.

Their cattle and other animals should not destroy the lives and properties of their landlords or original owners. They are free to continue with their cultural life creating organic structures but not attempting to take over the land which has been the properties of the host for centuries.

Although there are politicians who pretend otherwise, there are some who know and acknowledge the realities of the Nigeria nation. One spectacular example if Chris Ngige who has been in government for decades, starting from being governor of one of the states Kanu refers to, to the almost pinnacle of the national systems in Abuja.

In a recent rebuttal, Ngige reeled out a long number of political, public service positions occupied by respectable south-easterners and where they are doing pretty well. Nobody can contradict that authoritatively. He did not say the Southeast does not deserve to have a president, but he cautioned that the presidency is not the all issue involved in good governance or fair treatment of ethnic groups constituting a country.

Furthermore, while Sunday Igboho was going around, building support, convincing his Yoruba listeners of the need to have a Yoruba nation, Nnamdi Kanu was busy creating cells of discontent, manipulating issues and spreading hate and malice all over the place. And when his enemies had had enough and reacted, he fled the country and with a dual citizenship, literally waged a war against his homeland from abroad.

Unfortunately, many people buy cheap things, including propaganda laden with lies and fiction. The difference between the two is so glaring. While Igboho is struggling to live in the midst of hostile strangers to his homeland, Kanu is flying from one capital to another in chartered aircrafts. Kanu’s is a dual personality, being half-Nigerian and half-British. Igboho does share his native village with anywhere, not even Oyo town or Oyo State capital.

One is a native boy while the other is an “international” figure. So, the story goes! Perhaps the most important issue to note particularly by Kanu is that our brothers in the Southeast are the most mobile in Nigeria. More than that they settle easily and are happy to live in other areas, with other people in other climes in Nigeria. They settle down that easily and constitute substantial population in places like Lagos, Ibadan, Kano, Kaduna and most urban areas of our country.

One wonders how their innocent people view the escapades of our man Nnamdi Kanu. By all means, the federal government should safeguard the integrity of our country.

Issues militating against our sovereignty should be avoided or removed. But government needs to tread carefully, not involving innocent Nigerians whose intention is clear, let justice be done but let not the innocent be dragged into injustice.