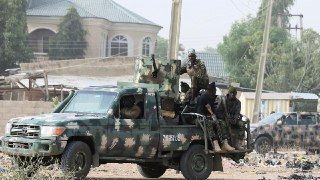 Troops of the Nigerian Army have foiled an attack on Geidam, a town in Yobe State.

Boko Haram insurgents, who launched a massive attack on Geidam months ago, had attempted to infiltrate the town on Wednesday evening.

My Husband Was Murdered In My Presence By Boko Haram