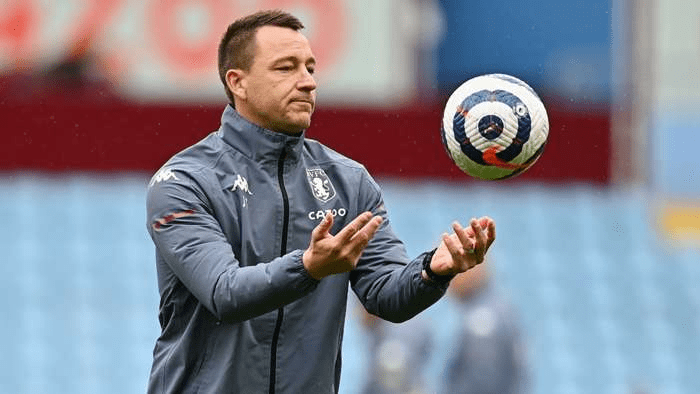 Ex-Chelsea and England defender John Terry has stepped down from his role as Aston Villa assistant manager.

Terry joined Villa as Dean Smith’s No 2 after finishing his playing career at the club in 2018, and helped them win promotion back to the Premier League in his first season in the dugout.

The Lions have since re-established themselves in the top-flight, finishing just outside the top ten in 2020-21, but Terry is now ready to seek a new challenge as a head coach.

Terry has confirmed his departure in an official statement on Villa’s website: “It has been a tremendous honour and privilege to have spent these last three years at Aston Villa, but I feel now is the right time to make the extremely difficult decision to move on.

“I want to be as respectful to the manager and everyone at Aston Villa as I can and, having given my future serious consideration over the summer, I genuinely don’t feel it is fair to move into a new season without being certain of seeing that through.

“My immediate plan is to spend some quality time with my family and, thereafter, hopefully, take up some invitations to visit clubs and managers around Europe to develop my aim and objective of becoming a manager.

“It has always been my ambition to move into football management and, providing the right opportunity presents itself, I feel ready to take up such a challenge. I would like to thank Christian Purslow and our owners, Wes Edens and Nassef Sawiris, for believing in me and giving me the opportunity.

“I will forever be indebted to the gaffer for giving me the opportunity to start my coaching career at such a wonderful club. I have loved every minute of it and learnt so much. I can’t thank Dean enough for the support and guidance he has provided me with and I’m sure he will continue to lead the club from strength to strength.

“Finally, I would also like to thank all the players and staff and wish them all the very best for the season ahead and say a huge thank you to the wonderful Aston Villa fans for their support.”

Smith is sad to see his right-hand man leave Villa Park after three years of progress, but has no doubt that he will go on to carve out a reputation for himself in management.

“I’m disappointed to lose John as part of my coaching staff but fully understand and respect his decision,” he said. “John has played a huge role in the success the club has enjoyed over the last few years and has been very supportive of myself throughout that period.

“I have no doubts he will go on to be a first-class manager in his own right and wish him well for the future.”

It is not yet known where Terry will begin his career as a head coach, but he has been linked with several different posts.

The Chelsea legend, who won five Premier League titles and the Champions League at Stamford Bridge between 1998 and 2017, was touted as the most likely replacement for Phillip Cocu at Derby County last year before the job was eventually given to Wayne Rooney.

Terry has since been linked with vacancies at Bristol City and West Brom, with it highly likely that he will look to earn his managerial chops in the Championship.