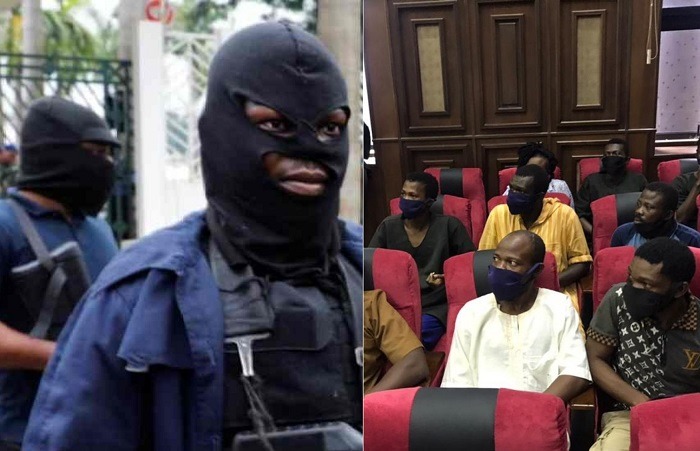 The 12 detained aides and supporters of the Yoruba nation agitator, Sunday Igboho, have been granted bail by Justice Obiora Egwatu of the Federal High Court sitting in Abuja.

The bail was granted on Wednesday in a suit filed by the applicants’ lawyer, Olajengbesi Pelumi, against the Director-General of the Department of States Services.

The application had sought an order for the DSS to produce the detainees and show cause why they should not be granted bail.

Recall that Justice Obiora Egwatu of the said court had on July 23 and July 29 ordered the DSS to produce the applicants after its failure to bring them for hearing of the Fundamental Human Rights case filed against the state service.

DSS had told the judge that it had secured a court order to detain the plaintiffs arrested during its operatives’ invasion of Sunday Igboho’s home in Ibadan on July 1.

The judge, however, demanded that the security agency must produce the applicants in line with the order of court.

On Wednesday, the 12 applicants were in court and Pelumi urged the judge to grant them bail.

“On the last adjourned date, the court ordered that we file our amendment and same has been done….

“It is proper at this time to pray this honorable court to admit the applicant to bail. There will be no need to keep the applicants with the Respondents.”

In his reply, DSS Counsel, I. Awo said only 8 of the 12 applicants should be granted bail.

He argued that the other 4 persons were allegedly complicit in stock piling ammunitions and that the DSS needed more days to interrogate them and subsequently charge them to court.

“This is because, so far, investigation conducted by the DSS revealed that the level of their involvement in the offense of arms stock piling and other criminal activities are minimal while the other 4 applicants (2,12,6,5) have high level of complicity on their part.”

He said the DSS was still investigating their involvement in crime.

Awo further contended that ammunitions were recovered from 4 of them and that they might run away like their leader, Igboho.

He also accused the family members of the applicants of attempting to influence the witnesses the DSS was planning to bring to court.

“The said Sunday Igboho, the leader of the applicants is currently standing criminal trial in Benin Republic; my lord, he was declared wanted by the service but rather than turning himself in, he decided to leave this country.

“My lord, there is no guarantee that this four applicants will not follow suit.

“My lord, there are credible information on how friends, family, associates with these four applicants are making contacts with potential witnesses identified by the DSS. They have started pressurizing some of them not to turn in, in the event that they will be tried.

“We strongly believe that these four applicants who are still needed for further investigation, will jeopardize ungoing investigation if released.

“It is our submission that once investigation is concluded, the respondents will not hesitate to charge them to court. We urge your lordship to refuse bail to these isolated 4 applicants,” he said.

Awo also made an oral application to further detain the 4 persons since the earlier court order it obtained had elapsed.

But Pelumi prayed the court to discountenance the submission of the respondents, adding that the law stated that anyone arrested should be produced in court within 24 hours.

“My lord, it took the order of this court for the respondents to allow even the legal representatives to meet with them.

“The position of the court is that investigation cannot be indefinite…the Respondents allegations is not before this court in form of any charge.

“We pray this court to admit all the 12 applicants on bail unconditionally as the respondents has not shown any charge or reasonable intention to prosecute this matter,” he said.

“The applicants should be allowed to go in peace and enjoy the benefit of the constitution and we shall ensure on our part as legal practitioners, that a reasonable surety will ensure that the applicants will be available,” he added.

After taking note of their arguments, Justice Egwatu ruled that the 12 applicants be granted bail.

“No doubt, the administration of bail is at the discretion of the court.

“It is clear that no charge has been preferred against the applicants and they have been kept in detention for 34 days.

Sunday Igboho: My Client Will Remain In Benin Until… – Lawyer Declares

“I grant bail to the 8 applicants in sum of 5 million naira with surety…,” he said.

For the 4 other applicants, he ruled that the DSS had no charge against them, thereby granting them N10 million bail with two sureties.

He said one of the surety must be a civil servant not below grade 12 and must reside in Abuja.

“The fear by the respondents has not been linked to the four applicants and has not been captured in the affidavit by the DSS.

“For 2,5,12,6, applicants, since no charge has been filed… bail is granted to them in sum of 10 million naira and surety.

The applicants are to remain in DSS custody pending perfection of their bail conditions.

Names of the applicants are: