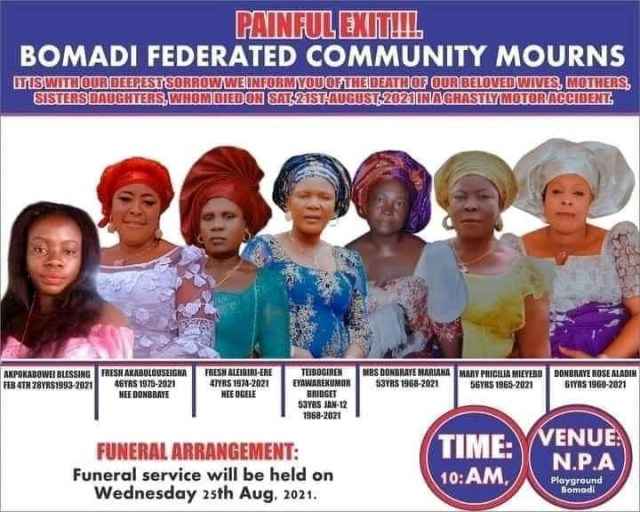 Seven wedding guests who died in a ghastly accident in Delta state will be laid to rest on Wednesday, August 25.

It was gathered that the victims were on their way from the wedding of a relative in Agbor when the accident which took their lives happened.

According to viral report, their vehicle; a Toyota Sienna veered off the road into a bush, and somersaulted several times. The seven women died on the spot, including the driver while two persons survived.

Shocking: Man Saved By His Seat Belt After Falling Off A Bridge In Ghastly Accident (Photos)

The women who until their death were members the Bomadi community would be laid to rest in the community on Wednesday.

One Prince Perekeme Bonny who took to Facebook to mourn their demise wrote,

“The Great lost at BOMADI town. Seven beautiful Vibrate ladies dead at a motor accident on their way back home, from ther sister marriage ceremony at Agbo and after everything they drove back, the motor turnbled into a Calvert river. Two ladies survived and seven ladies died. All is from Agorodei peile Quarters, BOMADI federated Urban community.”