See The Pictures Of The Most Beautiful River In The World 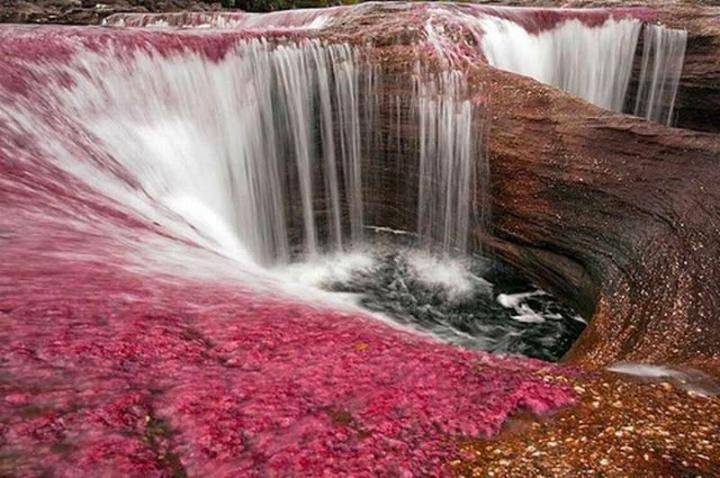 The river shown in the photographs below is Caño Cristales, an amazingly colourful river in Colombia. With the photos here you will believe it’s the most beautiful river in the world.

The river takes on many different colors, including yellow, green, blue, black, but especially red, caused by the weeds at the bottom of the river (Macarenia clavigera).

The river is commonly called “The River of Five Colours”, “The Liquid Rainbow” “The River That Ran Away to Paradise”, and “The very Beautiful among others in the World” due to its striking colours.

This is what Caño Cristales looks like with its beautiful red color. Looks like something straight out of The Bible.

Interestingly, for most of the year the river is actually indistinguishable from any other river.

During the short span between the wet and dry seasons, when the water level is just right, a unique species of plant that lines the river floor called Macarenia clavigera turns a brilliant red, making it attain that notion ‘Beautiful’ in the world. It is offset by splotches of yellow and green sand, blue water, and a thousand shades in between.

The site of the river was effectively closed to tourists for several years because of guerrilla activity in the region along with concerns about the impact of unregulated tourist traffic.

It was reopened to visitors in 2009, and today there are several Colombian tourist agencies that will take visitors of a guided tour of the area.

BBNaija Eviction: I Might Be Evicted Tonight – Queen Reveals

[…] READ ALSO: They Call This The Most Beautiful River In The World. When You See It, You’ll Probably … […]

[…] They Call This The Most Beautiful River In The World. When You See It, You’ll Probably Agree […]

[…] READ ALSO: They Call This The Most Beautiful River In The World. When You See It, You’ll Probably Agree […]