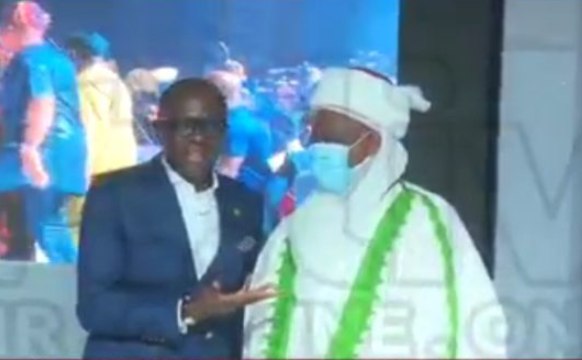 A viral video broadcast by Africa Independent Television (AIT) shows that the first-class monarch allegedly snubbed the governor at the 2020 Leadership Conference and Award held in Abuja last Thursday.

Anaedoonline.ng understands that the event was attended by Vice President Yemi Osinbajo, Ministers, Governors, politicians among other dignitaries.

But in a statement on Wednesday signed by the Commissioner of Information and Strategy, Gbenga Omotosho, the Lagos state government denied the video that the governor was snubbed by the Sultan.

Omotosho stated that the video is mischievous and, therefore, condemnable for attempting to destroy the image of the governor and the Sultan.

The commissioner berated the media house for trying to cause disaffection between Governor Sanwo-Olu and the Sultan.

The statement added that it is not possible for the Sultan to contemplate snubbing Governor Sanwo-Olu or any other governor in Nigeria.

He, therefore, urged members of the public to disregard the video and continue to support the Sanwo-olu government.

Why We Must Package Pidgin As Nigeria Official Language – TuFace Idibia