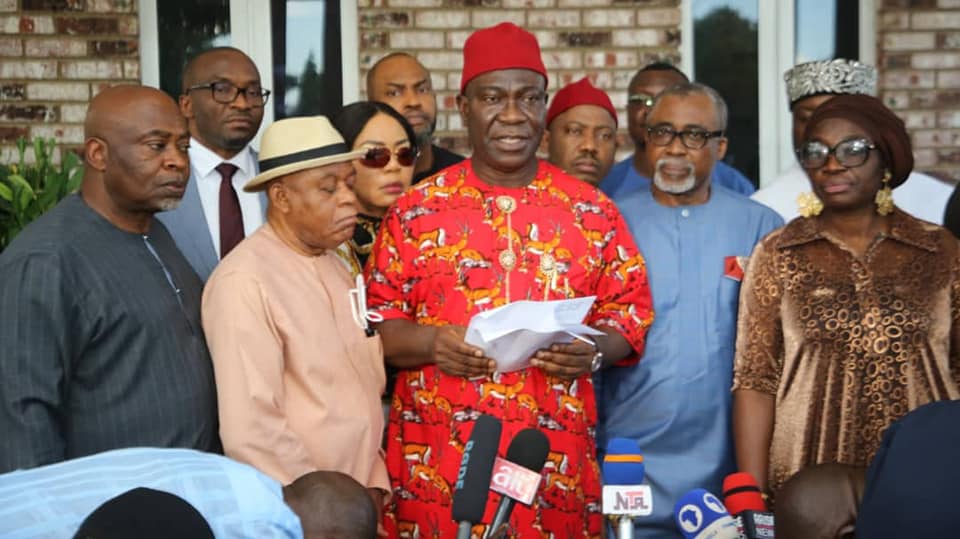 The South East Caucus of the National Assembly met today, Wednesday 15, 2021. The meeting was held at the residence of the former Senate President, Senator Ike Ekweremadu at the Apo Legislative Quarters, Abuja.

They held this meeting to review developments in the South East, particularly (a) The security situation in the region vis-à-vis the sit-at-home orders and (b) The detention of Mazi Nnamdi Kanu.

Rising from the meeting, the Caucus concluded thus:

1.  Expressed solidarity with our people of the South East over the marginalisation of the region in the scheme of things within the Nigerian commonwealth. The Caucus feels the pains of our people and their quest for equity, justice, and protection of their lives and property in every part of the country.

The Caucus, therefore, resolved to continue to fight for a level-playing ground and an enabling federal system where Ndigbo are able to develop their homeland at their own pace and equally pursue their happiness and actualize their enormous potentials in every part of the country, unmolested.

2.  Reviewed the sit-at-home orders by the IPOB and the mayhem some nefarious elements have seized the opportunity to visit on the lives, properties, and psyche of our people. The Caucus equally reviewed and rued the incalculable economic losses and hardships these have brought upon our region.

3.  Resolved to condemn in strongest terms the disruption of the ongoing Senior Secondary School Certificate Examination in some parts of the South East, particularly the incident at Comprehensive Secondary School, Nkume, Njaba Local Government Area of Imo State, where the English examination organised by the West Africa Examination Council, WAEC, on Monday, September 13, 2021, was ruthlessly scuttled by armed men, who chased away the students, teachers, and examiners before setting ablaze motorcycles belonging to the teachers.

This is certainly not who we are as a people. On the contrary, we are a people, who have always cherished and encouraged learning from the ages. We are a people that fully appreciate the place of education in the liberation and enlightenment of the human mind and the socio-economic and political emancipation of a people.

4.  Equally condemned in strongest terms the incessant killings in the South East. This must stop immediately. We call on the security agencies to unravel the culprits behind these wicked acts and ensure that they are brought to book to serve as a deterrent to others.

5.   Noted with delight that IPOB has called off the Monday sit-at-home order and resolved to ensure that nobody uses them as façades to bring ruination on Igbo land.

7.   Elaborately discussed the issue of Mazi Nnamdi and resolved to intervene. To this end, we resolved to set up a committee to constructively interface with relevant stakeholders, the Federal Government and its relevant agencies towards finding a political solution. We will keep Ndigbo abreast of developments in regard.

8.   Appeal to our people not to allow anyone to destroy the South East region. The post-war South East was not built through government patronage, but largely by the sheer determination and sacrifices of our people, who refused to resign to fate or bow their heads in defeat.

It is in Igbo land that you easily find hospitals, schools, roads, and other social amenities built by individual or communal efforts of the people, home and abroad, through the instruments of the town unions and other community organisations such as the age-grades, Umuada, etc.

The result is the comparative transformation witnessed in every nook and cranny of Igbo land post-civil war. Therefore, as a people, we cannot begin to undermine ourselves or become our own nemesis.

Times like these call for introspection. We must also always bear in mind that our people thrive on industry, commerce, and the informal sector. Importantly, most of our people depend on daily income.

Therefore, while we must fight for our rights and legitimately express our displeasures over every form of mistreatment, injustice, and inequity, we certainly cannot afford to be the proverbial lizard that ruined his mother’s funeral.

Anything that threatens Igbo businesses, the peace, security, and stability of the South East threaten our very existence as a people.

Consequently, bearing in mind that if we allow cracks in the wall, lizards will invade our home, we must all pull together as one people to discourage and resist any tendencies and actions, within or without, which pollute our business environments or encourages anarchy and instability in our region.

9.  Finally resolved to join hands with other patriotic Nigerians across regional, religious, political, and ethnic divides to reconstruct a federal system where our rights, happiness, and prosperity and those of our unborn generations are guaranteed.

All Members of the South East Caucus
National Assembly