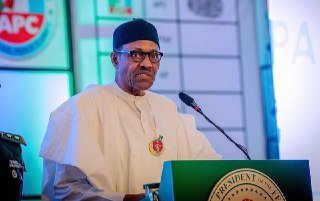 Anaedoonline.ng reports that this is coming as numerous accusations of human rights abuses hangs on the neck of his government.

The present administration has become notorious for attacking peaceful protesters, as an inquiry in still ongoing over the shooting of live bullets at peaceful EndSARS protesters at the Lekki Toll Gate on October 20, 2020.

UNGA: How Nigerian Govt Sponsored People To Protest Against Us – Akintoye

The Buhari administration has also been accused of attacking protesters at the Unity Fountain in Abuja, allegedly unleashing thugs on peaceful protesters across the country, parade of criminal suspects, shutting down of social media handle Twitter, extra-judicial killings by security agents, attack on secessionists, illegal detention, disobedience of court orders, among others.

But speaking at the United Nations General Assembly, Buhari said his government protects rights including the advancement of women, the protection of children, the protection of the rights of people living with disabilities, the treatment of migrants, refugees, returnees and displaced persons as well as, the promotion of fundamental freedoms through all legitimate means.

He said: “In this regard, my delegation commends the positive example of leaders like Prime Minister Jacinda Arden of New Zealand.

“In this context Nigeria calls for collective global action through a Treaty to end all forms of violence against women and girls of all ages.

“Nigeria remains unwavering in its commitment to ensuring the advancement of human rights within its shores and beyond. This is so even in the context of a vicious decade-long onslaught by terrorists against Nigerians, quite contrary to unwholesome reports by some who hardly verify what they state against us.

“The recent rise in hate related crimes globally underscores the urgent need to continue our engagement about racism, racial discrimination, xenophobia and other related intolerance. It is sad to note that the issue of racism remains alive globally.

“We are beginning to forget our affirmation of the inherent dignity and the equal and inalienable rights of every individual as enshrined in the UN Charter. No society can claim to be free or just if it deprives anyone of these rights.

“Nigeria has long been a principled fighter against racism and all forms of discrimination inspired by its African experience. In the past, racism oiled the machine of slavery and colonialism. Today, racism drives hate crimes and institutional discrimination. In all this, Africans and people of African descent are among the major victims.”