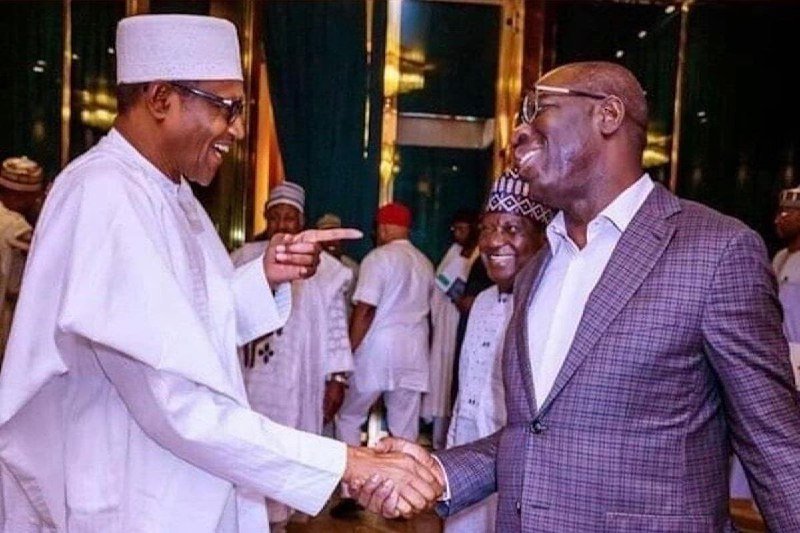 Emerging from a meeting with President Muhammadu Buhari in the Aso Rock Villa on Wednesday, the Edo State Governor, Godwin Obaseki, has reiterated his resolve not to return to the All Progressives Congress (APC) even as he addressed the lingering crisis in the state chapter of his new party.

He stated that it was not his will to leave the political platform that sponsored his election in his first tenure but was pushed out of the party when he wanted to run for the second tenure.

Anaedoonline.ng had reported the Governor’s visit to the presidential villa barely a day after he explained why he is yet to sign the anti-open grazing law which southern governors resolved to pass in their states.

Asked by state house correspondents whether he was contemplating a return to the APC, Obaseki said, “I think I have shown that I’m a politician with integrity and I have made it very clear that I didn’t leave the other party on my own.

“I was pushed out of the party, and someone else gave me cover, gave me an opportunity, it will not be the right thing to do to now, to leave who helped you, who gave you the umbrella in your storm, and then go back to the person who pushed you out.”

It would be recalled that Obaseki, who was locked in a supremacy battle with former party chairman, Adams Oshiomhole, joined the PDP after he was denied the gubernatorial ticket of the APC just before the 2020 election in Edo State.

The Governor also spoke on the lingering internal crisis in the Edo state chapter of the PDP, pointing out that as a party that was in opposition for 12 years in the state, it would take a while to develop an understanding among new and olds members.

According to him, “You have to understand that this is politics. My current party was in opposition for 12 years and this is the first time the party is being in government.

“So, it will take a while for everybody to come together to have an understanding of the new role and the new position we occupy.

“It’s only a natural and normal process in party politics. But I can assure you it’s been sorted. Yes, we had a peculiar situation. So, it’s not just about me coming to join your party.

“There were some internal crises, even in the old party, which we’re trying to heal. We’ve made some significant progress and I believe that it will be sorted out before our convention.”