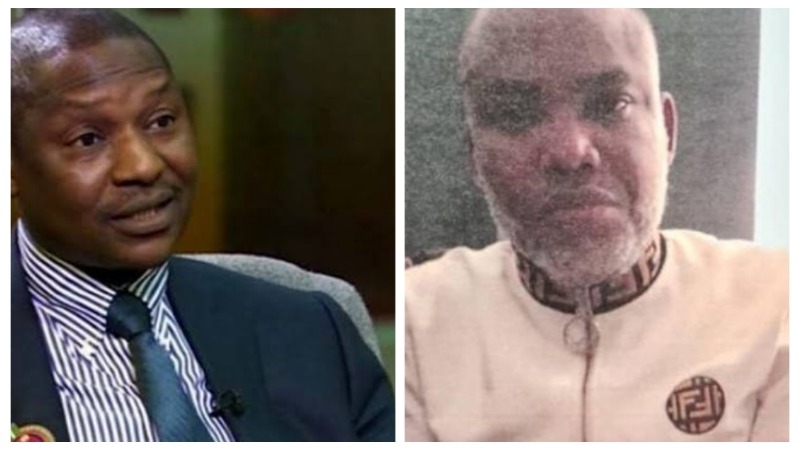 The Nigerian government through the Attorney-General of the Federation, Abubakar Malami (SAN) has pleaded with the Abia State High Court to give it and other six respondents an extension of time to defend the lawsuit filed by Aloy Ejimakor on behalf of the leader of the Indigenous People of Biafra (IPOB), Nnamdi Kanu, SaharaReporters has gathered.

Recall that the IPOB leader through his lawyer had in August 2021 approached the Abia High Court to enforce his fundamental rights, stemming from the military invasion of his Umuahia home in September 2017 and his subsequent “extraordinary rendition” from Kenya in late June 2021.

Anaedoonline.ng had reported that Ejimakor lamented on October 7 when the case came up for hearing, that the case file had not be assigned from the vacation court where it was last heard on 21st September.

In a court document obtained by SaharaReporters on Wednesday, the Respondents which included the President Muhammadu Buhari’s government and the Attorney were served on 10th September, 2021.

This indicated that they had five days from the date of service to reply to the suit in accordance with the Fundamental Rights Enforcements Procedure Rules. Those five days expired on 15th September, 2021.

However, the application for extension of time which was filed on 6th October is being opposed by Ejimakor.

A perusal of the Application by the Nigerian government and the AGF revealed that they pleaded for the discretion of the court to accept their defence despite their lateness.

The Court document partly read, “The Respondents will be heard praying this Honourable Court for the following orders.

“An order for an extension of time within the 1st and 2nd Respondents can file and serve his Counter-Affidavit and other processes in this suit out of time.

“An order deeming the said filed processes as having been duly filed and served.”

In his reply, Barrister Ejimakor opposed the application, citing statutory and judicial authorities that disallowed inordinate delays in hearing cases of this nature, especially as he said that his Client, Kanu is in detention.

It also emerged that the case had been assigned for hearing to Abia High Court 1, which is said to be presided over by the Chief Judge of the State.

Our checks revealed that the next hearing date has not been set.