Everything We Know About Igbo Age Grade System Explained 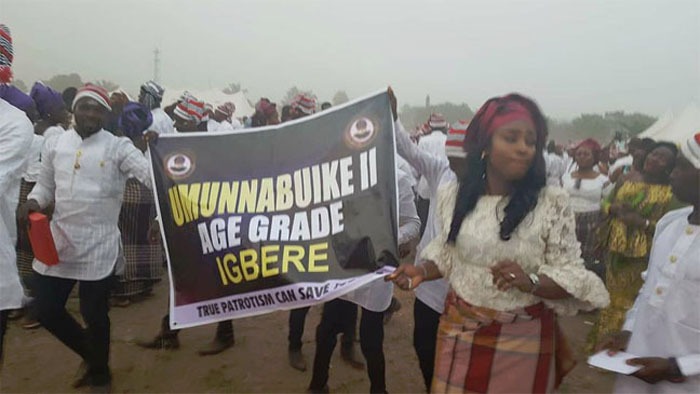 The Igbo age grade is an ancient institution on its own that is very integral in Igboland. The Igbo age-grade system has been in existence as far back as the ancient Igbo times, it is one of the compulsory rites of passage that defines an individual standing in the community.

The age system is like an arm of the Igbo traditional government, it has been used by traditional rulers to champion causes and at the same time, they have acted as agents of change usurping and overthrowing governments that prove unworthy and useless. Every adult Igbo individual aligned with his or her culture has an age grade they belong to.

Age grade as we all know is a group of persons who are considered to be of the same age bracket. Age grades in Igboland vary from village to village, in some communities, people within a specific 3-5 years come together to form an age grade. Also these age grades, most times are gender-segregated, a man and a woman even though within the same bracket are separated into different groups but communities like Atani-Arochukwu have the same age grade for both genders called Obinwanne.

A cross-section of an Igbo age-grade system

It is true that the significance and functionality of some of our Igbo institutions have been watered down over the years especially after embracing the western ways, but some parts of Igboland have held fast to some of our old ways, the Bende people of Abia State are one of the few communities that have upheld the Igbo age-grade system in its totality. It is not to say that other communities no longer practice it rather they are not as they used to be, that is why we will look at the Igbo age-grade system through the lens of the Abiriba community in Abia State.

The age grade known as Uke in the Abiriba dialect is an integral part of the community, they play a huge role in the socio-economic life of the community including development.

The Abiriba age grade is gender-segregated, all the males are categorized into different groups as regards their date of birth. The groups are meant to render compulsory services to the community. As they grow, the age-grades are nurtured by the Amogudu community in Abiriba, through the ‘Uke Ogba Ngwuru and Uke Ekpe institutions.

At the first stage known as Izara Efa, the traditional ruler of Amogudu names the age grade after which they become an entire Abiriba community organization.

In the last four years of the twelve years between their naming (Izara Efa) and coming-into-maturity, the members of the age-grade are called Uke Igwa Mang. Those last four years are the most active of their age-grade service, every energy exerting responsibility in the community is by default assigned to the group. During the olden days, they were charged with the protection of the community and fighting battles. However, with the dawn of the new age and no men in leaves as clothes brandishing spears, the Uke Igwa Mang duties have meta morphed into various leadership roles in the community including community labor mobilization and utilization for projects such as road building and maintenance, soil erosion control, fighting of fires in the community and many more community services. As a matter of fact, all three secondary schools in Abiriba, the magistrate court, the library, the post office, and even the police station were all built by age grades.

At the end of the four active years, the Igwa mang ceremony which means fulfillment of vows takes place. The Igwa Mang ceremony usually takes place around the end of the year, December or November. Members of the age grade dress up in war regalia while parading the community in a triumph of a successful four years of service, at the time of this ceremony they are usually within the 40-55 age bracket. After the elaborate ceremony of the Igwa mang, members of the age grade are then recognized as able-bodied citizens who have earned their place in society.

After the Igwa mang ceremony, begins the countdown to the Ime Uche ceremony which is otherwise known as the ‘Retirement ceremony’.

Everything You Need To Know About Igbo Rites Of Passage

Symbol of the Age Grade System in Igbo Society

It is true that decades of colonialism and modernity has broken down our cultures, the roles and symbol of the age-grades in Igbo land remain significant albeit watered down.

Apart from family, the Igbo age-grade institution is the bedrock of socialization for all members of the community. Basic community beliefs and stories are handed down through the system.

The age grade is also a system that fosters unity amongst members which trickles down to the community at large, keeping the society together.

When a particular individual is a source of worry to his family or community at large, is not uncommon to hear the question ‘kedu ndi otu ogbo ya’ meaning where are his age-grade group. Questions like this are asked because above every other thing, the Igbo age-grade groups are charged with maintaining law and order in the society starting amongst themselves and the community.

Like the Uke Igwa mang, the members are also charged with protecting the community from external enemies till this present age.

The Age-grade group also serve as an institution of checks and balance for the local rulers of their various communities. Most innovations and development across Igbo communities today were championed by different age-grade groups during their time.

The Igbo age-grade system is one of Igbo’s sacred institutions that should not be allowed to go into oblivion as it keeps the balance in our society.