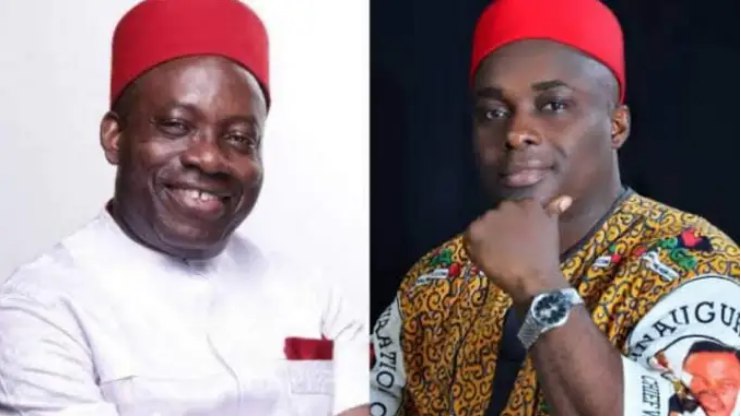 The Supreme Court are set to decide the fate of the All Progressives Grand Alliance (APGA) and its governorship candidate in the Anambra State November 6 poll, Prof. Charles Chukwuma Soludo.

The apex court is expected to determine which of the factional executives of the party was legal and validly conducted the party’s governorship primaries in Anambra State.

The outcome of the Supreme Court’s verdict will decide whether or not Soludo or a member of the House of Representatives, Chukwuma Michael Umeoji, is APGA’s candidate for the governorship poll.

The apex court took the decision yesterday after hearing from the counsel of some leaders of APGA who have been involved in legal battle – from the High Court and the Court of Appeal.

Although the case had been on at the Supreme Court in the last two weeks, it was at yesterday’s session the apex court gave the parties a notice that it would announce its position on Friday.

The leading lawyers, Chief Wole Olanipekun (SAN) and A. U. Mustapha (SAN), were given till tomorrow to make all their submissions to the court.

Based on the primaries conducted by Victor Oye and Chief Edozie Njoku faction of APGA, Soludo was, on June 23, elected the party’s candidate with 740 votes out of 812 delegates.

But Umeoji, who is representing Aguata Federal Constituency, was on July 1 elected by Chief Jude Okeke faction of APGA with 904 votes out of 1,138 delegates.

The Okeke-led National Working Committee (NWC) of the party had suspended Soludo.

But an Anambra High Court in Awka, on July 19, ordered INEC to restore Soludo as APGA candidate.

According to records, APGA has been in a crisis since the tenure of its national officers ended in 2019.

The leaders of the party had been in and out of the High Court and the Court of Appeal before landing at the Supreme Court.

Now, the apex court is set to lay the controversy to rest on Friday.

Presiding Justice Mary Odili said the summary of the Supreme Court’s decision will be made available on Friday and the details given later.

A party to the matter, who spoke in confidence, said: “A counsel, A. U. Mustapha (SAN), submitted before the Supreme Court that the case is a pre-election matter and the 60 days allowable by the 1999 Constitution to hear such a matter will elapse on Friday.

“It was based on the counsel’s submission, which was upheld by the court, that the Supreme Court said it will deliver its judgment on Friday. The court directed all parties to make their submissions on or before Thursday.

“All the parties have been informed of the pending Supreme Court judgment on Friday. This will determine the fate of APGA and our governorship candidate.

“We are all eager to know what is next for us ahead of November 6 governorship election.”

A synopsis of the crisis reads: “The tenure of the national officers of APGA ended in 2019, which brought to an end the four-year tenure of Victor Oye-led national executives.

“On May 31, 2019, APGA held its National Convention at Owerri, Imo State, where new national officers were elected.

“The Owerri National Convention of APGA was as ordered by the Oyo State High Court sitting at Ibadan.

“At all times after the Owerri Convention, the national officers elected therein have been carrying out their duties and functions without interference from anybody.

“Immediately after the Owerri Convention and the election of Chief Edozie Njoku, Victor Oye filed an action against Chief Edozie Njoku at the High Court of the Federal Capital Territory (FCT) in a suit between Dr. Victor Ike Oye v. All Progressives Grand Alliance & Edozie Njoku.

“Chief Njoku, being the National Chairman of APGA at that time, filed his defence in a suit, disclosing an effectual and conclusive defence to the claims of Victor Oye and establishing the validity of the conduct of the Owerri Convention and election of national officers.

“However, upon seeing the effectual defence of Edozie Njoku to the suit, Victor Oye, who was the former National Chairman whose tenure has ended, hurriedly filed a Notice of Discontinuance of his suit on January 14, 2020.”