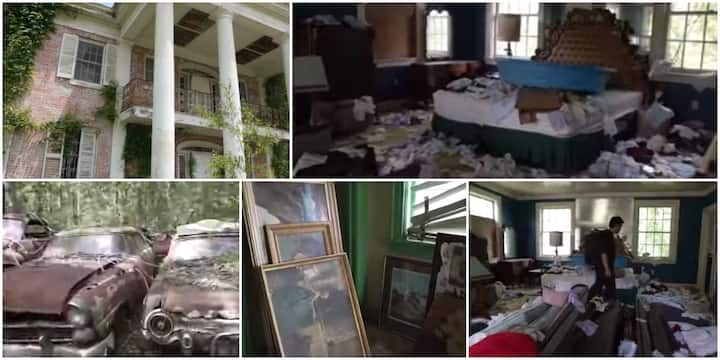 A man identified as Steve Ronin has found an old abandoned millionaires mansion with luxury items in it According to the video creator, the property has 100s of cars, beautiful furniture as well as luxury furniture Said to have been abandoned in the 1900s, the mansion still looks strong despite its scattered state Your support matters.

A man has stunned the internet with a video capturing an old abandoned mansion that he recently found. The video creator, Steve Ronin in company of two friends visited the property and were amazed by what they found.

The property was said to have been abandoned in the 1900s Photo Credit: Screengrabs from video shared by Steve Ronin Source: Facebook From the video shared on Facebook, luxury household furniture and fittings as well as beautiful paintings were spotted.

The mansion has a car graveyard of over 100 whips Steve who said that the mansion could possibly have been abandoned in the 1900s also found scattered bank statements that showed the fleeing owner of the mansion was in huge debt.

Over 100 cars were also scattered in the mansion including whips as Volkswagen Beetle, Lincoln Continental amongst others.

The fleeing family literally left everything behind. Mixed reactions trail the video Audra Fobbs remarked: “Believe it or not those picture frames and oil paintings can be restored I’ve seen picture frames going on sale at auction you know especially there are some books that are very pricey too you know because they use old school stuff like go leave you know the certain type of ink you know oh God I’m dying inside right now watching this.”

Letty Cecilia Zamora-Serujo thought: “There were a few houses abandoned because of black mold and the owners couldn’t take anything because everything was infected and it was deadly.

My Shocking Encounter With A Nigerian Carpenter – BBNaija’s Alex

Be careful, these places were abandoned for a reason.” Frii Holike wrote: “Vanity upon vanity all is vanity. No matter how much we acquire in this world we will all leave it and go. The only thing that can last is when we have Jesus. I was a good video to watch. Kept me thinking.

Thanks.” READ ALSO Igbo people use burials to milk you dry: Actress Mary Lazarus laments, recounts experience after mum’s death Elisha Agbo said: “I believe this place is protected for historical reasons, otherwise, what about their descendants that should inherit all those.

The family lineage cannot just be entirely wiped out even if there was an epidemic. What about distant relatives & their offsprings down the line? Or perhaps there was a mini rapture in their space .”

According to him, the beautiful car was stolen in Portland, South Africa in the doctors’ quarters of a hospital. He couldn’t believe his ears when the police called him and told him his car had been recovered.
However, although the man was excited to get his old whip back, he has since moved on to a bigger and better car. But he was grateful that his old car was found.