Nigeria Has Nothing For Igbos, The Earlier We Split, The Better – Chiwetalu Agu 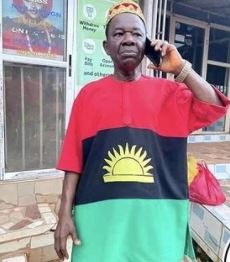 Nollywood veteran actor, Chiwetalu Agu, has said that it would be better for the Igbos to leave Nigeria.

Speaking to Broadway TV on his support for Biafra, Agu said the earlier Igbos left Nigeria, the better.

Agu revealed that he was not in any way brutalized by the army when he was arrested.

Giving details about his arrest, he stated that his regalia did not in any way connect to Biafra, Eastern security network, and IPOB.

Agu maintained that his regalia stood for the rising sun which meant that people would rise from their former state to something better.

Anaedoonline.ng recalls that the veteran was earlier arrested by the Nigerian Army in Upper Iweka Road, Onitsha, Anambra for allegedly asking passersby to join the Biafran movement.

While he was in the custody of the army, the veteran had insisted that his outfit stood for the rising sun and nothing else.

Agu was later released by the army and picked by the Department of State Service(DSS) for questioning.

The actor’s family had complained that the DSS denied them access to him.