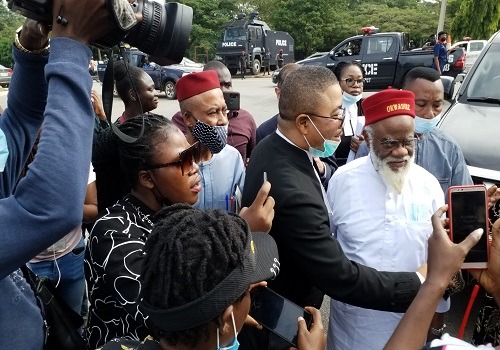 The youth wing of the apex Igbo socio-cultural organization, Ohanaeze Ndigbo, has called for calm after Nnamdi Kanu’s arraignment in court on Thursday.

This is as the group condemned the treatment meted out on some Igbo leaders, journalists and lawyers who were in the court to observe the proceedings during Kanu’s trial.

Anaedoonline.ng reported that Kanu was finally docked before Justice Binta Nyako of the Federal High Court, Abuja. He pleaded not guilty to the amended 7-count charge.

During the trial, a former Governor of Anambra State, Dr. Chukwuemeka Ezeife, a host of other Igbo leaders, journalists and lawyers were denied access to the court sitting.

Prior to his arraignment, his group the Indigenous People of Biafra, IPOB, had threatened a one-month total lockdown should the Federal Government fail to produce him in court.

He said the total compliance to the sit-at-home across the South-East was enough solidarity with Kanu and urged the youths to immediately de-escalate tension.

“We thank first of all our people for the peace and calmness that pervaded every corner of the South-East throughout today. It shows that our people are still totally united despite the picture our enemies would want to paint.

“At this juncture, I appeal to our youths to cease any form of hostility, including the Monday sit-at-home. We all saw Mazi Nnamdi Kanu today hale and hearty and in high spirit.

“It is, therefore, necessary that we all calm down and allow ongoing efforts to secure his freedom. We are totally aware of genuine efforts to ensure that he is released as quickly as possible. We should give those behind this move the chance and the needed air of freedom to see this through.”

Okwu, however, expressed anger over the way Ezeife and others were treated during the trial.

“We condemn such treatment in totality; there is no justification for that; Nnamdi Kanu is an Igbo son and Chief Chukwuemeka Ezeife was there with the mandate of Ndigbo to observe the trial of their son.

“We don’t know why the Federal Government has continued to treat Ndigbo as second class citizens. This has got to stop.

“This case has been adjourned to November 10 and we expect that before then, the authorities concerned should have talked to themselves and avoid a repeat of that show of shame.

“Journalists should also be allowed to carry out their constitutional duties, just as we warned earlier against a secret trial of the IPOB leader,” he said.