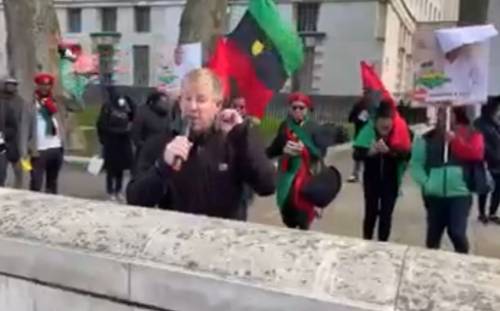 A Briton has led a protest to the United Kingdom Parliament to question Prime Minister Boris Johnson over his refusal to intervene in the perceived marginalisation of Igbo people in Nigeria.

In a video shared on Facebook, the white man who was flanked by people with Biafran flags alleged that the UK Prime minister is only after money and power.

He also demanded to know why the British government has kept mute over the alleged oppression, killing, kidnapping and molestation of Igbo people, especially their women by Fulani herdsmen all over Nigeria on a daily basis.

The man also urged the British Prime Minister to ensure the leader of the Indigenous People of Biafra (IPOB), Nnamdi Kanu is immediately released as the latter is a British citizen.

He also stated that the United Kingdom government ought to have no relationship with the Nigerian government, which he described as “the most corrupt government on earth”.

He said: “Millions of Biafrans were slaughtered and starved to death by the British government, the British government starved over three million children between 1967 and 1970 and you sit behind those doors and you know what’s going on, exactly the same is going on now to innocent people and you’re covering all up because you don’t want the average person to know what’s going on.

“Children are being murdered, mothers are being raped every single day in this Nigeria and you keep quiet. Catriona Laing, the British High Commissioner to Nigeria, doesn’t give a damn. She continues to have meetings with the Fulani regime killing his people.

“Free Mazi Nnamdi Kanu, that should be your priority, free your citizen because you are doing nothing, we have had enough of this. All hail Biafra!”