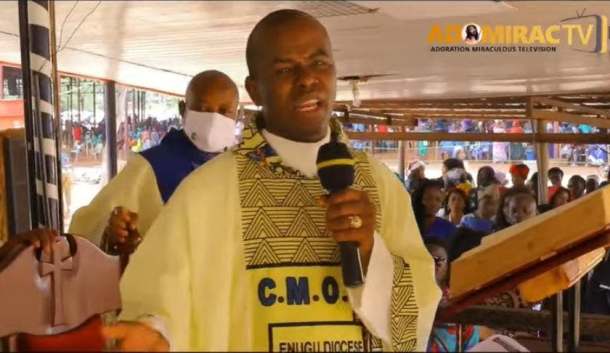 The Spiritual Director of Adoration Ministries in Enugu, Reverend Father Ejike Mbaka, has denied backing the candidate of the All Progressives Congress, APC, Andy Uba, in the just concluded Anambra governorship election.

Recall that the candidate of the All Progressives Grand Alliance, Chukwuma Soludo, was declared the winner of the election by INEC last Wednesday.

Anambra Election: What Our Investigations Found Out – Andy Uba

Speaking at his church on Sunday, Mbaka stated that photos of him endorsing Andy Uba on social media are false.

While stressing that those who shared the post are mischief makers, the controversial Catholic priest described all candidates as his friend.

He disclosed that APGA’s Soludo was his spiritual son who usually visits his home.

Mbaka said: “Last time I show in the social media a picture of me, Andy Uba and some other people and they wrote on it that Father Mbaka has endorsed Andy Uba. How? Where? When?

“When I have already said I have not endorsed anybody in Anambra. They are all my friends. Soludo is my friends, he comes to my house.

“He (Soludo) is my son, spiritually. So whoever put that picture is a mischief maker. That Andy Uba saga is satanic. And they can’t use me to cause trouble in Anambra.”

ESN To Deal With Enforcers Of Sit-at-home Order In South East –...