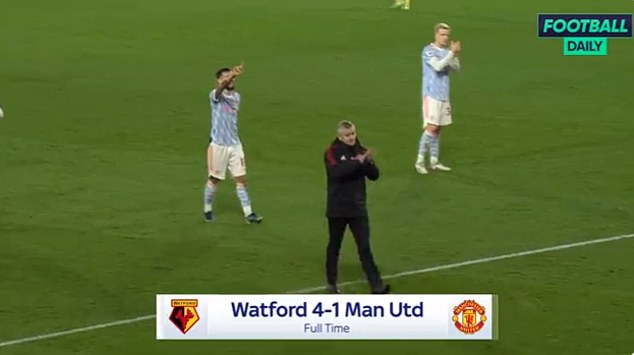 Ole Gunnar Solskjaer was booed by a number of supporters after Manchester United lost 4-1 to Watford in their English Premier League encounter on Saturday.

While the fans booed Solskjaer, Bruno Fernandes was seen pointing to his teammates – in what looks like a suggestion not to single out the manager.

Solskjaer has clung onto his job despite a run of just one win in seven Premier League games to slip to seventh, 12 points adrift of the leaders.

United’s hierarchy has remained loyal to Solskjaer despite intense pressure in recent weeks to make a change.

But even their resolve will be tested after a fifth defeat in seven league games against the struggling Hornets.

Watford could even afford to miss an early penalty twice as David de Gea saved from Ismaila Sarr and Kiko Femenia’s follow-up from the first spot-kick was ruled out for encroaching.

Joshua King worked under Solskjaer in the United youth ranks and did his old boss no favours by converting a low cross on 28 minutes to give the home side a deserved lead.

Sarr made amends for his penalty misses just before the break by drilling home from a narrow angle.

Solskjaer Reveals Manchester United Will Not Do Business This Winter

Solskjaer responded by introducing Donny Van de Beek at half-time and his refusal to give the Dutchman more opportunities will be questioned after he made an instant impact to turn home Cristiano Ronaldo’s header across goal.

However, just as the visitors were building momentum, captain Harry Maguire’s miserable season suffered another setback when he was sent off for a second bookable offence.

After a tough Champions League trip to Villarreal on Tuesday, United travel to the league leaders Chelsea next weekend with the question again whether Solskjaer will still be in charge.

David de Gea told Sky Sports News, “It was embarrassing, to be honest, to see Manchester United play like we did today.

“Of course now it’s easy to (blame) the manager and the staff, but sometimes it’s the players.

“We are professional players, we are playing for Manchester United, so we need to show much more than we are.”