The Nigerian-American singer shared a photo she took with her mum in 2006, a year after she survived the Sosoliso plane crash, alongside a recent photo of them together. 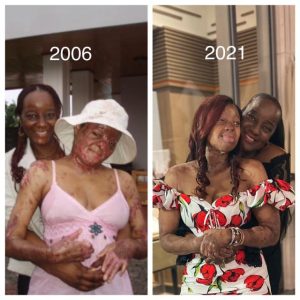 Sharing the photos she described her mum as her role model and noted that they have come a long way.

“Mommy. Nne’m. Nwanyi oma. My role model for life. I found this pic and got the urge to just appreciate you. We’ve come such a long way. I love you so much, you vampire, you. Ije-Duru Okwuchi.” She wrote. 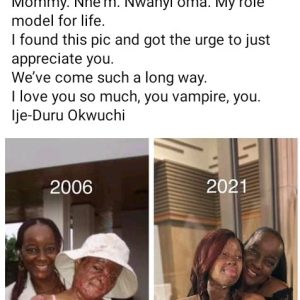 The 31-year-old was one of the two survivors in the Sosoliso Airlines Flight 1145 crash on December 10, 2005. She recently took to her social media page to reflect on her life’s journey thus far.

“Smiling through it all, I know I’ve come a long way but reminders like this pic from 14 years ago really drive it home for me. I hope this encourages someone. No matter what you’re currently going through, if you’re not dead, God’s not done. Periodt”, she wrote.