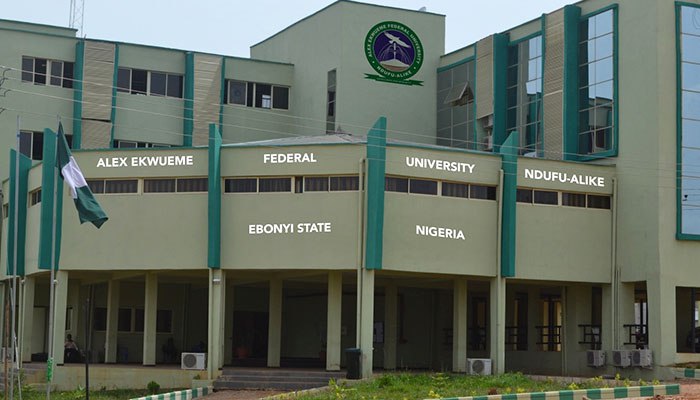 The Management of Alex Ekwueme Federal University Ndufu-Alike, Ebonyi State has reacted to an alleged sexual violation of a minor by a lecturer of the institution.

The Ebonyi State Command of the Nigeria Police Force had confirmed in a statement on Sunday that the rape suspect has been arrested and is being investigated.

The Police Public Relations Officer in the state, Mrs Loveth Odah said that the Commissioner of Police, Mr Aliyu Garba had been informed of the incident and has ordered a discreet investigation into the matter.

The management of the higher institution has, however, responded to allegations on its staff following a call pushed through by a Naija News correspondent.

In the statement issued on Tuesday morning by Head, Public Relations & Information of the varsity, Elom Iyke Ubochi, the institution noted that it is yet to receive an official complaint on the alleged crime by its staff.

It further stated categorically that the said crime was not committed within the school environment.

The statement reads: “The attention of the Management of Alex Ekwueme Federal University Ndufu-Alike, Ebonyi state has been drawn to the news making the rounds in both the traditional and new media about a lecturer in the University alleged to have sexually molested a minor and house-help.

“The University wishes to state as follows:

“The Management is yet to receive an official report/complaint on the alleged crime; and will act accordingly as soon as such report is made.

“Dr Felix Anyaegbunam is not a resident of Alex Ekwueme Federal University Ndufu-Alike staff quarters, which means that the alleged crime did not take place within the University premises.

“Contrary to media claims, Dr Felix Anyaegbunam is not a Professor of Geophysics at our University, but a senior lecturer in the Department of Physics.

“Our University, Alex Ekwueme Federal University Ndufu-Alike, is a serious public institution guided by the core values of excellence and integrity and does not condone any form of criminality.

“The general public is hereby assured of our University’s unwavering commitment to the ideals and culture of a world-class institution,” the school management maintained.

Lecturer Who Confessed To Sexually Harassing A Student Have Been Dismissed

Very Sad! Gunmen Kill A Lecturer Engaging In Taxi Services To Feed His Family In Ebonyi

If I Become President, You Will Be Proud To Be Nigerian –...