The detained leader of the Indigenous People of Biafra (IPOB), Mazi Nnamdi Kanu, has sent an important message to his followers over the Biafra movement.

The embattled separatist according to one of his brothers, Prince Kanu Meme, has asked his disciples to trust and comply with directives from the Directorate of State (DOS).

Boasting his belief in the separatist movement’s administrative structure, Kanu said “I’m DOS and DOS is me”.

Sit-At-Home: IPOB Reveals Why They Can’t Go Against Nnamdi Kanu

Anaedoonline.ng understands that the DOS, headed by diaspora-based Chika Edoziem has been contending with authority issues since Kanu’s arrest in Kenya in June 2021.

It has been observed that IPOB is in disintegration following Nnamdi Kanu’s rearrest and detention. The present situation of the Biafran movement can be likened to that of sheep without a shepherd.

However, Kanu in a conversation with his sibling on the ongoing commotion in the group beginning from the DOS, down to the zonal coordinators, said IPOB members must not yield to Satan’s enticements.

Prince Kanu’s statement after the alleged Monday night meeting with the embattled IPOB leader reads: “Today being the 22/11/21, I visited the AlphaMale Mazi Nnamdi Kanu leader of the Indigenous People of Biafra at the department of state security services Abuja.

DSS Reacts Over Alleged Maltreatment Of Nnamdi Kanu In Its Detention

“After being properly informed, he left me with these 2 messages to Biafrans. Do not yield to Satan’s enticements, rather, stand firm for truth. He said, I’m DOS and DOS is me. Finally, he assured Biafrans and lovers of freedom that Elohim is in full control”. 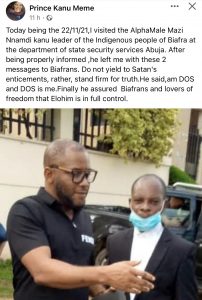