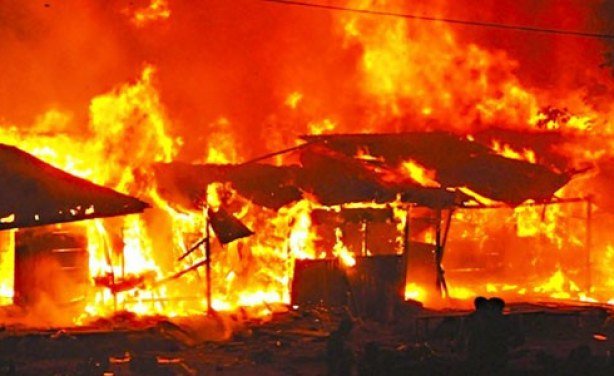 The Federal Fire Service in Abuja has confirmed that a fire outbreak gutted a part of the popular Nyanya market in the Federal Capital Territory on Tuesday.

Though the cause of the fire is yet to be identified as of when this report is given,

The Abuja Fire Service, however, in a statement through its spokesperson, Ugo Huan, confirmed that its officials have responded to the incident and the fire is under control.

“It is true. We received a distress call and our men went there. Everything is under control,” She said while confirming the fire incident.

In another story, a week ago, a former Big Brother ‘Shine Ya Eye’ housemate, Jumoke Zainab Adedoyin popularly known as JMK, reportedly lost all her belongings to a raging fire.

According to the Twitter user, Ever Diva via the microblogging platform, the reality star lost every one of her possessions including her phones, certificate and clothes to the raging fire.

Anaedoonline.ng reports that Ever Diva scent shared the terrible news on Twitter some moments ago.

She wrote; ”Fire Burnt down everything JMK had, her phones, certificates, clothes bruhh this is heartbreaking”

Jumoke is a politician’s daughter who came to prominence after making an appearance at the Big Brother Naija season 6 titled ‘Shine Ya Eye’.

She is also an indigene of Ijomu-Oro, Irepodun LGA, Kwara State was born and raised in a family of three children.

Like most of the housemates on the reality show, Jumoke is law graduate from Afe Babalola University and she is the daughter of the Ex-Commissioner of Information in Kwara, Alhaji Raheem Adedoyin.

JUST IN: Hi-Impact Studios On Fire

SHOCKING: Nigerian Student Sets Himself On Fire, See Why