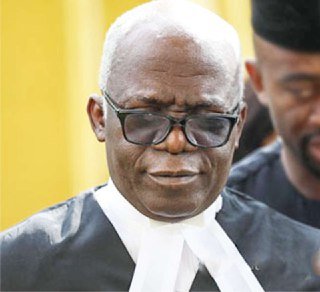 A popular human rights lawyer, Femi Falana has berated the Minister of Information and Culture, Alhaji Lai Mohammed, for dismissing the report submitted by the Lagos State Judicial Panel of Inquiry on Restitution for Victims of SARS Related Abuses and other matters.

But in a statement on Wednesday, Falana stated that the comments of the minister have ridiculed President Muhammadu Buhari and have rubbished Nigeria’s image.

Falana submitted that the comments of the minister have overruled the statements of the President during a recent meeting with the United States Secretary of State, Antony Blinken.

He asked the President to call Mohammed to order, adding that the minister’s actions have undermined the rule of law and social justice in the land.

Falana also accused the minister of insulting the Governor of Lagos State, Babajide Sanwo-Olu, by rejecting the report of the panel instituted by him under the Tribunal of Enquiry Law of the state.

The lawyer, therefore, urged the Lagos State government to ignore the rejection of the report by the minister and implement the recommendations in the report.

He asserted that the Federal Government’s name was not clothed with any power under the Tribunal of Enquiry Law.