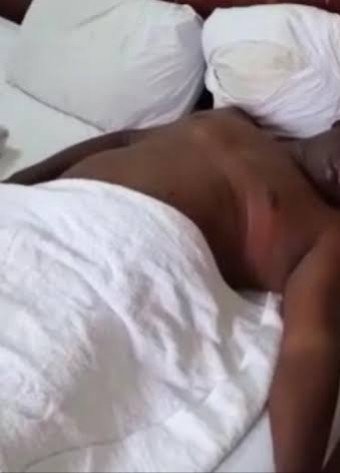 Information reaching Anaedoonline.ng reveals a man has been found dead in a hotel room after quarreling with his wife.

The deceased, identified as ‘Thank God’ was found dead in a hotel room at Eleparanwo in Obio/Akpor Local Government Area of Rivers State.

Reports have it that Thank God had spent a night in the hotel after an altercation with his wife.

A staff of the hotel told the Punch that the mirror in the man’s room was broken and he suspected that the deceased broke the mirror and used it to slit his throat.

He went on to state that they knew something was wrong when they didn’t hear from the man after his time elapsed, they decided to go through the back to get into the room.

He said: “We went through the back and pushed the air conditioner to see if someone could go inside and open the bolt. In the process, we broke the door open. Everybody, even his family members were here. They came in and saw him. He broke our mirror and maybe used it to cut his throat. We saw the mirror in the bath. They (his family) saw everything and started shouting.”

The spokesperson of the state police command Nnamdi Omoni stated that he heard about the incident but that he could not confirmed the situation yet.

“My Wife Wants Me To Abandon My Aged Mother” – Man Laments

Man Makes A Shocking Finding About His Colleague’s Partner