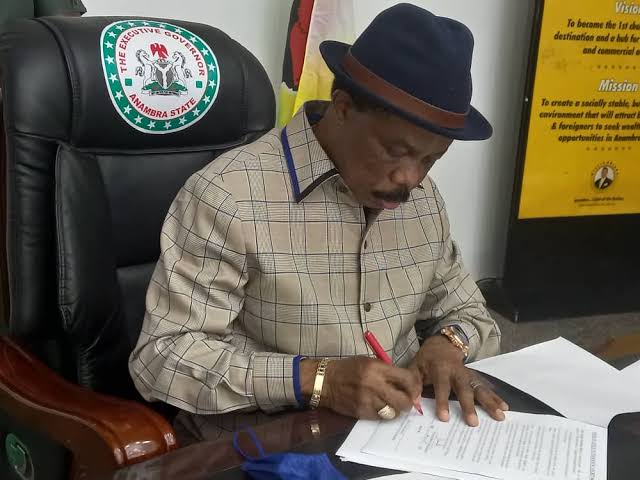 The governor who is presently out of the country had been under investigation for carrying out various white elephant, including the Umueri International Airport project which cost was believed to be inflated.

It was learnt that the EFCC had earlier invited some commissioners and principal officers over the alleged mismanagement of the state funds.

The Federal Government had shared N388.3bn among the 36 states and the Federal Capital as part of the reimbursement for the over-deduction on the Paris Club loan in December 2016.

Seven states reportedly got above N14bn, four states got over N13bn, two states received above N11bn and five other states were given amounts above N10bn while the remaining 11 states got less than N10bn each.

Anambra State was said to have received N11.3bn.

The state governments had submitted their claims of over-deductions for external debt service arising between 1995 and 2002 to the Federal Government due to the First Line Charge deductions from Federation Account Allocation Committee allocations.

The debt service deductions concern the Paris Club, London Club and multilateral debts of the Federal Government and the states.

Many of the states reportedly shared their portions with their local governments mostly to settle the backlog of salaries and some of the state debts.

The FG subsequently released the second tranche of the Paris Club refund totalling N243.7bn which was shared to the states and the Federal Capital Territory following the approval of the President, Major General Muhammadu Buhari (retd.) on May 4, 2017.

Anambra State reportedly got over N6bn from the fund which was said to have been misappropriated.

The state’s loan burden under Obiano was also said to have ballooned to $111.48million. The facility was taken from China, India and other international organisations.

Many citizens of Anambra State were said to have petitioned the EFCC, accusing the governor of allegedly frittering away the huge sums of money left behind by his predecessor, Mr Peter Obi.

They also accused the governor of burdening the state with debts without much to show for it.

The anti-graft agency had in a letter dated November 15, 2021 placed the outgoing governor on its watchlist and directed the Nigeria Immigration Service to stop him from leaving the nation through any of the international airports in the country.

The commission was said to have commenced a discreet investigation of the governor and possibly have intelligence that he plans to escape after he hands over power to his successor, Prof Charles Soludo, in March.

Obi reportedly left billions of naira in the state’s coffers for his predecessor while handing over in 2014.

Obiano also reportedly inherited $156 million in Fidelity Bank, $50m in Diamond Bank and another $50m in Access Bank, which sources said was mismanaged.

The Governor was also accused of not developing the state as residents complained of bad roads and the absence of infrastructure.

A source said, “Take the Umueri international airport, which was being built at N16 billion. The state government initially budgeted N6billion for the project in its 2020 budget. In the 2022 budget, it allocated an additional N10bn for the same project which was located in his hometown.

“Investigators believe the project was being used to launder and siphon money from the state coffers. Apart from this, the governor is expected to explain how he utilised the Paris Club funds, the security vote and other allocations when he meets with our investigators because the money he spent doesn’t seem to be commensurate with the projects on the ground.”

But the state Commissioner for Information and Public Enlightenment, Don Adinuba, claimed that the EFCC’s move against his boss was politically motivated by the All Progressives Congress.

Speaking on Politics Today, a current affairs programme on Channels Television on Thursday, he stated, “Nobody invited him (the governor) to interrogate him or hear his side of the story. No petition was presented to him. He did not make any comments. But all of a sudden, the EFCC announced rather secretly…using the media as a third party…to announce that he is being watched. That is very surprising.

“There is absolutely no reason for that. And worse, the EFCC gave the impression that the governor wants to bolt away when he has a whole four months to remain in office.

“It is unimaginable that a governor will abandon a state a whole four months to the end of his tenure. That is surprising. It just does not make sense to anyone simply because the whole exercise is politically motivated.”

The EFCC spokesman, Wilson Uwujaren, declined to comment on Adinuba’s allegations when contacted on Friday. “I don’t comment on such things,” he said on the phone.