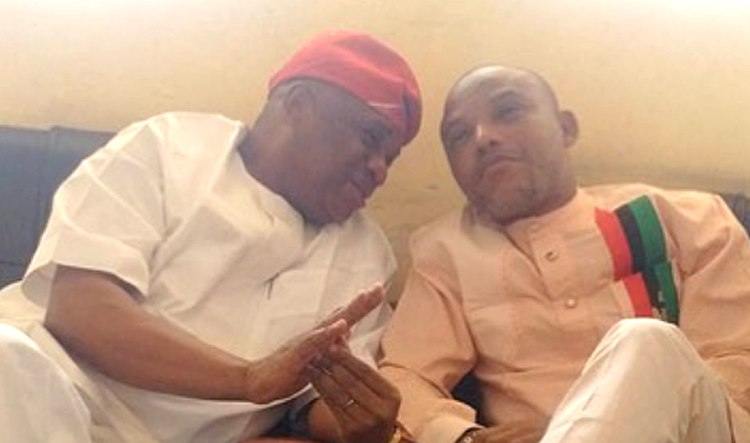 The family of the detained Leader of the Indigenous People of Biafra, IPOB, Mazi Nnamdi Kanu, has expressed rage and disappointment over what he called “confusing, incoherent, disparaging and uncomplimentary remarks” by Senator Orji Uzor Kalu after his visit to the IPOB Leader at the Department of State Services, DSS headquarters, Abuja on Monday where he is currently detained.

The former Governor and Senator representing Abia North District, has in a tweet after his meeting with Kanu, said that he advised Kanu to watch his utterance, “especially as he has insane amount of people rooting for his release.”

A tweet posted by the Senate Chief Whip read: “This afternoon, I visited my brother, Mazi Nnamdi Kanu in DSS custody , Abuja. I met him in good health and care and we discussed as ‘Umunne.

”In 2001 when I was Governor, I made his father Eze Israel Okwu Kanu traditional ruler of Akwara Ukwu and since then the family has been very close to me.

“I understand that Nnamdi has an insane amount of people rooting for his back home and I encouraged him to consider the consequences of certain actions and utterances for the sake of the same people.

“Even though, my ideology and his ideology are totally different , God has made us brothers and we can’t run away from each other. I owe him and Nigerians good counseling …Whether he and his family listens to me or not, I will continue counseling him as I have always done in the past. What we need most is a peaceful and secured society.”

But Kanu’s family in a swift reaction, lampooned the former governor, accusing him of unnecessarily advertising his visit to Kanu “probably for political gains”.

Kanu’s younger brother, Prince Emmanuel Kanu, who spoke for the family, demanded explanations from the former governor “what he meant by Kanu’s insane amount of people rooting for his release”.

The family cautioned the Senate Chief Whip against “making unguarded utterances on subjects beyond his comprehesion.”

”What does Senator Orji Uzor Kalu want to achieve by those confusing and disparaging remarks? Is he saying that millions of followers of Nnamdi Kanu who feel disenchanted by the protracted and provocative marginalisation and injustice perpetrated against Biafrans by the Nigeria Authorities are insane?

”Who is Kalu working for? Must he advertise his visit to our brother? If he thinks he has any solution to offer can’t he work from behind the scene? Must he make political capital of every issue?

”We are highly disappointed by his incoherent utterances. He must understand that our brother is not being persecuted because he stole, or commited any crime. His only crime if at all it’s a crime is asking for the freedom of the oppressed people of Biafra.

”Orji Uzor Kalu and his types are the reason the agitation for self determination by our people is unending. How can he be trusted by the people? We have not forgotten his role in 2017 when our brother was in Kuje prison. What is his mission? Is he for or against Nnamdi Kanu?

”By his utterances it’s clear that he is no solution but part of the problems of our people. He shouldn’t forget that history will judge him for all his actions and inactions.

“In case Kalu doesn’t know, real Igbo leaders are working behind the scene to bring about solution to the problem of our people. They don’t make noise over it”.

Buhari Reveals How His Govt Will Use 5G Tp Fight Boko Haram, Bandits