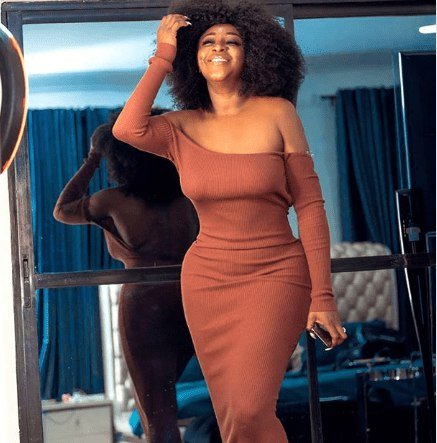 In what seems like a big revelation to who is behind the actress, Ini Edo‘s exotic lifestyle, controversial blogger, Cutie Juls has made digging into the actress’ private life.

According to the blogger, Ini Edo who recently welcomed her baby through surrogacy is having relationship issues with two men in her life. 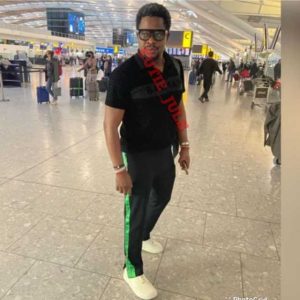 Revealing the face of Ini Edo’s sugar Daddy, Juls stated that married man, Kome is at war with the actress’s love interest and ex-lover of singer, Runtown’s manager, Ifeanyi.

The blogger revealed that the actress has been trying to get back to her Ex-lover, Ifeanyi, but her alleged sugar daddy has been threatening him ever since.

“Ladies and gentlemen, please meet Oga Kome. Beautiful Ini Edo’s baby daddy.
Online in-laws, please how much should we charge him for baby daddy price?
By the way he is married with kids so he is not our in-law. Just our babydaddy. We thank him immensely for availing his sp-erm but he should kindly let Ini be.
Ini wants Ifeanyi now. Ifeanyi sef get American passport..,” the blogger wrote. 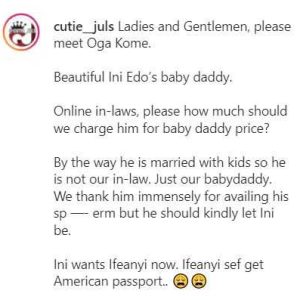 In another post, the blogger continues, “Online in-laws, please this is Ifeanyi. Singer Runtown’s manager in the states. Oga Kome who is Ini Edo’s baby daddy has been threatening him.

Lol so Kome doesn’t want marriage but he still doesn’t want Ini to have fun with especially younger boys cuz he knows she is likely to want them for keeps.

Ifeanyi is Ini’s ex whom she’s been trying to get back together with. Yh you know sugar daddies will pay the bill but at the end of the day, a lady needs her own man.

Ini has been messaging and planning holiday trips with Brother Ify here but Oga Kome doesn’t want to allow it.

Hmmm how do we solve this one?” 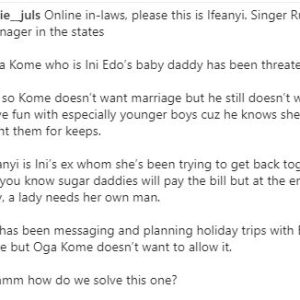 Why I Didn’t Like My Mother Growing Up – Dorcas Shola-Fapson Reveals...