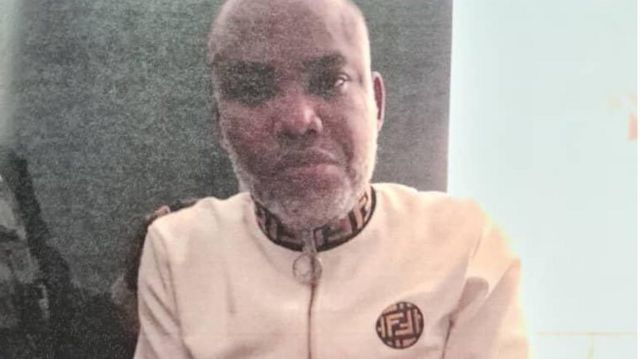 The Federal High Court sitting in Abuja, on Thursday, deferred hearing of the application the detained leader of the Indigenous People of Biafra, IPOB, Nnamdi Kanu, filed to quash the treasonable felony charge the Federal Government preferred against him, till January 18, 2022.

The adjournment came on a day trial Justice Binta Nyako ordered the Department of State Services, DSS, to allow the defendant to practice his faith and change his clothes.

The court equally directed the security agency to give the detained IPOB leader “maximum possible comfort in the detention facility”.

Kanu, who was remanded in custody of the DSS, had since June when he was arrested in Kenya and returned back to the country for continuation of his trial, wore only one attire.

He had, on the two occasions that he was brought before the court by heavily-armed security agents, worn a designers Fendi trousers and jacket, which he was reportedly putting on the day he was arrested.

Meanwhile, Kanu was absent in court at the resumed proceedings in his case on Thursday.

Though trial Justice Nyako had on November 10, adjourned the trial till January 19, 2022, she however brought the date forward, following an application by Kanu’s legal team for an abridgement of the date.

When the matter was called up, government lawyer, Mr. Shuaib Labaran, told the court that he filed a counter-affidavit to oppose Kanu’s requests for abridgement of time and for the charge to be quashed.

Without allowing the prosecution and the defence team to engage in any form of argument, Justice Nyako, after reviewing the court’s diary, said she could only bring the case forward to January 18, which is a day before the initial adjourned date.

Justice Nyako said she would hear all pending applications on that date.

Specifically, Kanu, in an application he filed through his team of lawyers led by Mr. Ifeanyi Ejiofor, is asking the court to acquit and discharge him of all counts in the charge.

He argued that the court lacks the requisite jurisdiction to try him on the basis of a charge he said was grossly incompetent.

The embattled IPOB leader contended that there was no proof of evidence attached to the amended charge against him.

According to him, “No allegation was made in any of the counts of the amended charge that the alleged sundry acts of the defendant/applicant were physically carried out by him, within the geographical space or territorial boundaries of Nigeria.

“That the only element requisite to constitute and found liability for incitement is the actual words allegedly uttered by the defendant/applicant.

“That the alleged acts for which the defendant was charged do not constitute terrorism offences in London, United Kingdom, where they were allegedly committed,” Kanu added.

It will be recalled that the IPOB leader had earlier applied to be transferred from custody of DSS to the Kuje Correctional Centre.

Even though the request was refused, Justice Nyako ordered the DSS to grant him access to three visitors of his choice, every Monday and Thursday of the week.

Speaking with Newsmen shortly before the court commenced sitting on Thursday, a member of Kanu’s legal team, Mr. Maxwell Opara, said the application to move him out of DSS custody would be revisited.