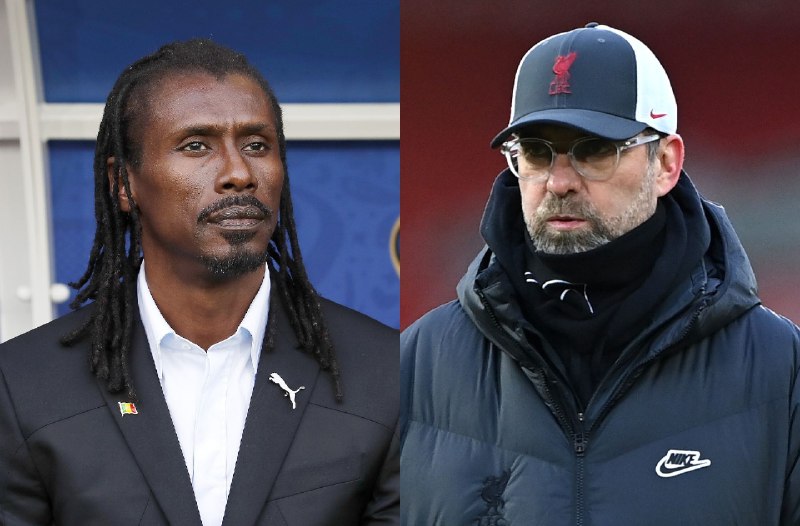 Senegal coach, Aliou Cisse, has slammed Liverpool manager, Jurgen Klopp, over his comments on the Africa Cup of Nations (AFCON).

Cisse suggested that Klopp is nothing without Sadio Mane and Mohamed Salah in his Liverpool squad, adding that the German owed his success to players from Africa.

Last month, Klopp caused a stir as he described the AFCON as a ‘small tournament’ after Liverpool’s Premier League 4-0 victory against Arsenal.

“In January, there Is a little tournament in Africa, I just want to say, and I think Asia is playing games too, South America as well, great, can’t wait.”

Liverpool are set to lose some of their players, including Salah, Mane and Naby Keita for the AFCON 2021 tournament, which runs from January 9 to February 6, 2022.

While Klopp subsequently backtracked, Cisse, who played in the Premier League with Birmingham City and Portsmouth, felt the Reds boss had shown a lack of respect for the AFCON, adding that he doesn’t respect him.

“Who does he [Jurgen Klopp] think he’s? I manage Senegal and my players play for Klopp at Liverpool,” Cisse told broadcaster iTV Senegal.

“He was losing every final until Salah, Mane, Matip came to his rescue to win his first-ever major European final.”

Meanwhile, Speaking after Liverpool’s 2-0 win over Porto in the Champions League last week, Klopp clarified his comments had been misinterpreted.

“I didn’t mean it like that. I don’t know why you understand it like that,” Klopp told a journalist, who had suggested his comments had offended African players and fans.

EPL: Klopp Reacts After Stunning Loss To Brighton At Anfield

“It is not even close to the idea in my mind that I want to talk about AFCON as a little tournament, or the continent of Africa like a little continent, not at all.

He added, “There is still a tournament. A big one. We lose our best players to the Africa Cup of Nations.

“I’m not a native speaker, but if you want to understand me wrong you can do that all the time. I know that I would never think like this.”