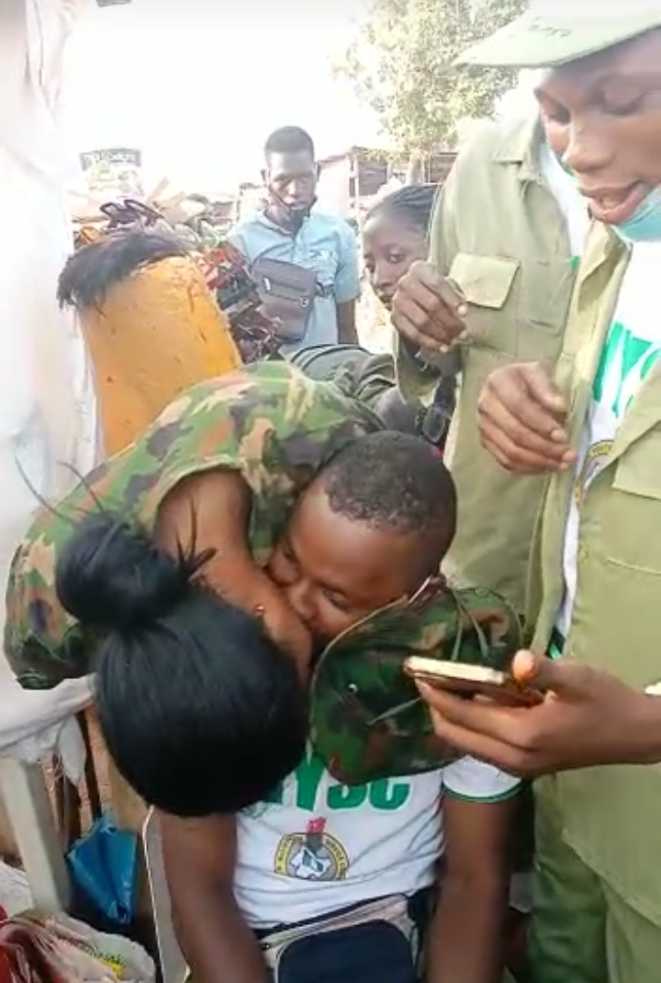 The Nigerian Army on Sunday confirmed the detention of an unnamed female soldier who got romantically entangled with a male corps member at the National Youth Service Corps orientation camp in Yikpata, Kwara State.

The Director of Army Public Relations, Brigadier General Onyema Nwachukwu, in an exclusive chat with The PUNCH on Sunday, said the female officer violated military laws by getting involved in a public display of amorous relationship with a paramilitary trainee – a corps member.

Video clips showing a male corps member proposing to a female soldier at the Kwara NYSC camp hit the internet days ago eliciting pleasant reactions from many social media users.

One of the video clips apparently recorded on the camp’s parade ground showed the yet-to-be-identified corps member holding a ring as he curtseyed to ask the female soldier to marry him.

The visibly excited spinster, in military uniform, accepted the young graduate’s proposal and the latter went on to insert the ring in his love interest’s finger. The lovebirds later locked themselves in a warm embrace and kissed passionately to the cheery applause of other corps members.

However, speaking with reporters on Sunday, the Army spokesman said the female soldier violated the Nigerian Army’s rules and regulations guiding the codes of conduct of military personnel when deployed for duty.

Nwachukwu said the female soldier’s action amounted to taking advantage of her trainee, noting that the public would have been outraged and accused the Army of coercion had a male soldier proposed to a female corper during NYSC parade.

He said, “The female soldier in question violated the following rules of the NA:

“1. Fraternization while on official duty at the NYSC camp. That is, indulging in an amorous relationship with a trainee.

“2. A personnel must have served for three years before he/she can qualify for marriage.

“3. She disobeyed the Armed Forces of Nigeria standing guidelines and directives for the use of Social Media.

“4. Indulging in romance while in uniform.

“5. Her conduct was prejudicial to good order and military discipline.

“All the above, if proven are in violation of extant laws with attendant disciplinary and penal implications.”

The Army spokesman, however, declined comments on the likely punishment the female soldier might get but said “the Nigerian Military like all others, has its disciplinary codes, distinct from that of the general society. Every personnel has voluntarily undertaken to be bound by this code.”

In a viral video, Anele ordered the corps member, who was in her uniform to kneel down as she used a bowl to scoop muddy water from a bucket and poured same on her.

The Army had condemned the action and said the soldier would be tried for unprofessional conduct but it had yet to make the conclusion of the trial public.

The NYSC scheme was created in May 1973 by former head of state, Yakubu Gowon, as a tool for healing, reconciliation and nation-building after the horrific experience of the civil war between the Biafran side and the Nigerian State.

The scheme encourages the posting of graduates to states other than their state of origin as they are expected to mix with people from different ethnic groups, social and family backgrounds, and learn the culture of the indigenes in the location they are posted to.

The young graduates are camped for three weeks and are drilled in paramilitary skills by soldiers before they are deployed to their places of primary assignments.

As Nigeria’s security challenges aggravate in the last couple of years, some critics have called for the discontinuation of the scheme citing the kidnapping and killing of precocious corps members but the government has defended the continued existence of the scheme, saying it is still fulfilling its purpose as an avenue for ethnic integration.