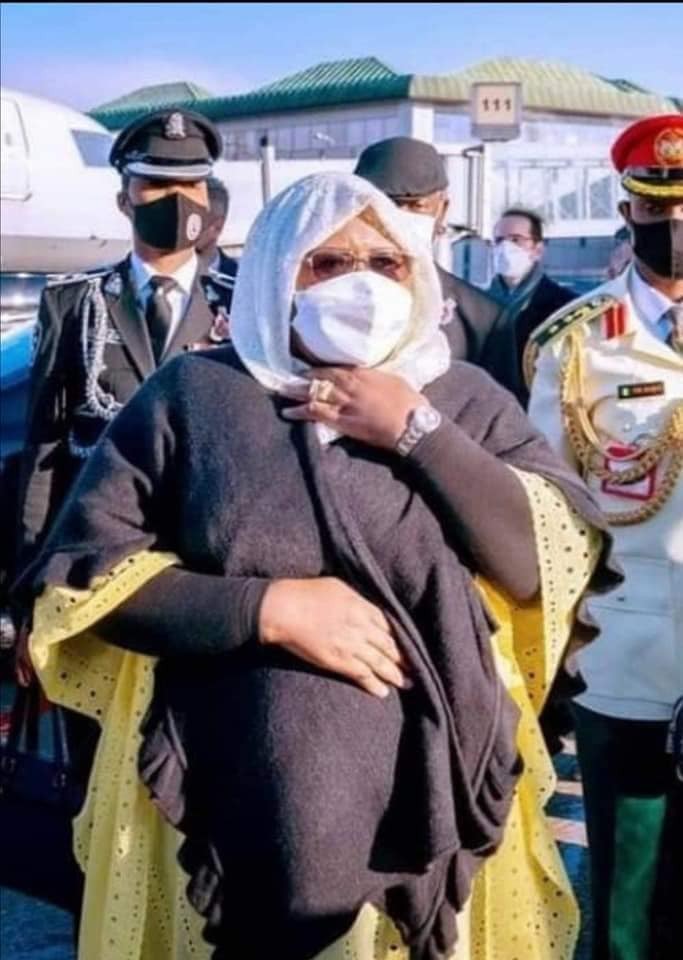 Nigeria’s First lady, Aisha Buhari has denied social media reports that she is pregnant and expecting a baby.

Anaedoonline.ng reports that some pictures emerged online which has made Nigerians question if the wife of the President is pregnant.

The pictures were taken during the return of President Buhari and Aisha Buhari from Turkey where they attended the Turkey-Africa Partnership Summit, hosted by Turkish President, Recep Tayyip Erdogan.

In an interview with BBC Pidgin on Monday, spokesman of the first lady, Sulaiman Haruna, denied reports that his principal is expecting another child.

Haruna stated categorically that the first lady is perfectly okay and not suffering any ailment as insinuated.

He added that the reports are handwork of mischief makers who are bent on ridiculing the family of President Muhammadu Buhari.

He said: “I can assure you 100 percent that our first lady is perfectly okay. She is neither sick nor pregnant as some reports claim.

“Some of these reports are from mischief-makers who don’t mean well. You know, nowadays, people can tamper with photos.”

In another news, a video showing the moment a guest created a scene at a wedding ceremony after he found out that the bride is his own girlfriend has surfaced on social media.

According to reports, the yet-to-be identified man who showed up to the venue just like the other guests received the shock of his life after discovering that the lady who was getting married was his girlfriend.

Distorted by the turn of events, the man who could not believe his eye started causing drama but was quickly whisked away by security guards at the wedding before things could escalate.

The video was shared online alongside the caption; “He was invited to a wedding and he came to meet his girlfriend as the BRIDE.”