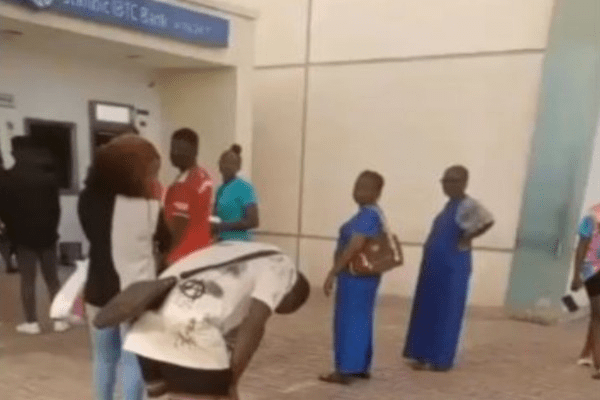 A young man suspected to be an internet fraudster popularly as recently lost his sanity while waiting in line to withdraw money from a cash point.

In a video posted online, the young man was seen standing in line at a Stanbic Bank branch in Lagos when the whole drama started.

Without prompting, he bowed his head and stared at the floor for several minutes while waiting in line – drawing the attention of others on the queue.

Things quickly went south when he dropped his bag, removed his shirt and began to shout.

How Six Suspected Yahoo Boys Died In An Auto Crash

The Yahoo guy was heard shouting “I use my mama” in the video, while chasing after a bystander.

It is however not clear if he truly lost his sanity or the act was recorded just for social media clout.

Watch the incident in the clip below.