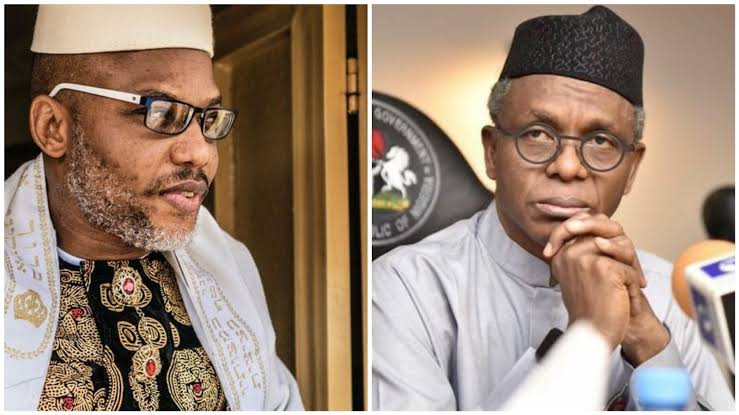 The Indigenous People of Biafra (IPOB) has called the Governor of Kaduna State, Nasir El-Rufai’s likening of the group to terrorists and bandits as provocative and mischievous.

IPOB said it remains a peaceful organisation with global relevance, adding that El-Rufai has displayed utter ignorance by comparing it with blood-sucking criminals.

The group assured that the governor will soon appear before International Criminal Court (ICC) in the Hague for allegedly sponsoring Fulani herdsmen to clandestinely kill innocent people in Southern Kaduna.

This Is What Caused The 1966 Civil War – Nnamdi Kanu Reveals

IPOB said this to react to El-Rufai’s statement on Tuesday that IPOB is not different from terrorists and bandits, whom he said deserve to die.

This was contained in a statement by the spokesperson, Emma Powerful, which was made available to Newsmen on Wednesday.

It read, “We are the global movement and family of the indigenous people of Biafra (IPOB) under the command and leadership of Mazi Nnamdi Kanu.

The pro-Biafra group said El-Rufai’s statement “is not only provocative but a mischievous display of ignorance for El-Rufai to compare freedom seekers with bloodthirsty terrorists.”

“El-Rufai should stop playing to the gallery. No amount of cover-ups can exonerate him from the ongoing genocide in Southern Kaduna by Fulani bandits,” it added.

Reno Omokri Reveals Why El-Rufai Is Angry With Jonathan

It continued, “He should cover his head in shame for admitting that he is paying the mass murderers in Kaduna State. He should know that he has a date at the ICC.

“We challenge him to mention any act of terror committed by IPOB. Our only crime against El-Rufai and his fellow mass murderers is that we refused to allow Fulani bandits any breeding ground in Biafra land.

“Malam El-Rufai should swear by Allah that he knows nothing about the ongoing ethnic cleansing of non-Fulani communities in Southern Kaduna and re-naming of their towns to Fulani communities.

“It’s only in Nigeria that IPOB which maintains a presence in over 100 countries can be tagged a terror organisation. But the world knows we are not terrorists and don’t intend to be.”