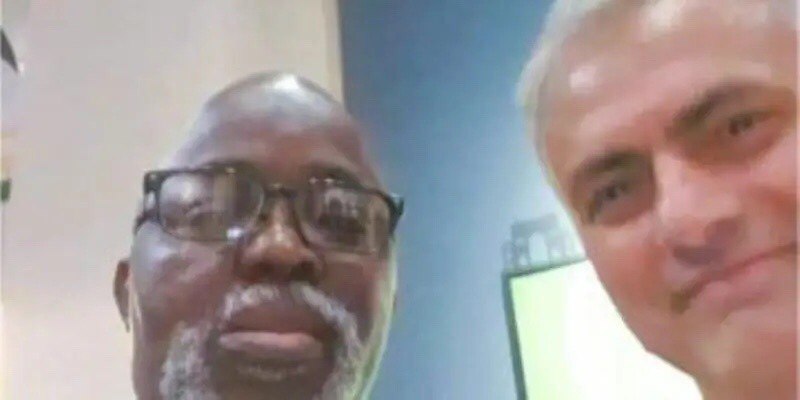 Nigerians have reacted to the report that Nigeria Football Federation (NFF) contacted AS Roma manager, Jose Mourinho, to take over as Super Eagles coach.

Anaedoonline.ng earlier reported that NFF President, Amaju Pinnick, had said the federation held talks with Mourinho and Serbian Mladen Krstajic in a bid to get a top-class coach for the national team.

Pinnick while speaking with sports journalists in Lagos said the National team would get a new coach within the next week or thereabout.

He further stated that Portuguese Jose Peseiro, a former Real Madrid assistant coach and FC Porto head coach, was on the three-man shortlist for the Eagles coaching job.

Reacting, Nigerians have taken to social media to express their views on the claim made by the NFF president.

Some Twitter users slammed Pinnick and the NFF members for embarking on a fruitless journey while others were unconcerned about the news.

Below are some of the reactions culled online:

@eebig6 wrote: “They met him to advise and refer someone for the Job. According to a rumour, Mourinho suggested Venezuela coach, his fellow Portuguese.”

@kingrichwise wrote: “This man Pinnick wan really take Nigerians do picnic Face with tears of joy
Can’t imagine what even come through his mind or the entire NFF to have to think of approaching Mourinho.
Scam process Police cars revolving light Nigerians should watch out.”

@MosesIbhas wrote: “Africans amazes me. You mean no one is qualified for the job within the nation? Mourinho didn’t wake up to be who he is today, opportunities were given him to prove his worth. If Oliseh failed don’t stop there try anoda retired super eagle and bring the best out him. Wat of JJ?”

@Mikkyoko wrote: “You wan see Crazy abi, Mourinho way no get joy when it comes to Money matter.”

@Ruinin_football: “You sack Rorh for playing boring pragmatic football, and now you want to appoint another defensive manager.”

@Amaju18: “What are u meeting him for. Why do we reduce the crises of our football to coaches alone?”

@irigo_m wrote: “The way I burst into laughter. NFF is trying to be serious or trying to accomplish an impossible task?”

LATEST: What Triggered The P-Square Come Back Revealed