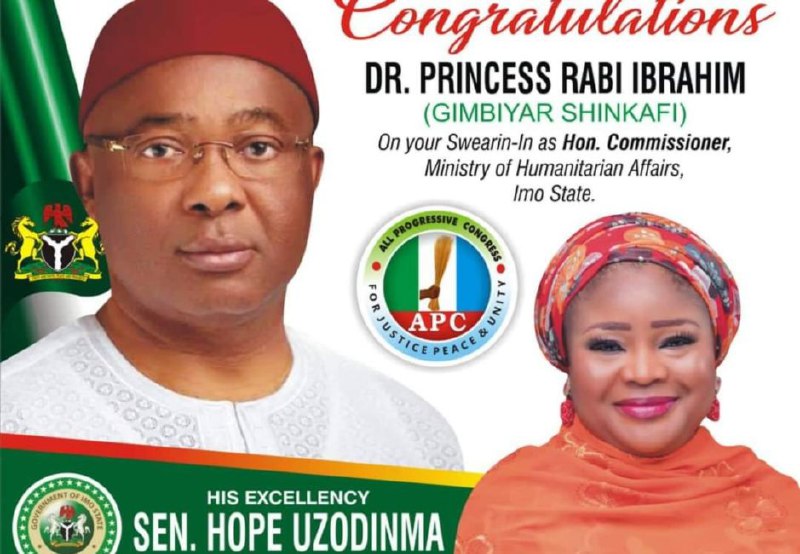 The Zamfara Commissioner for Women and Children Affairs, Rabi Shinkafi, has revealed why she resigned from the state and took an appointment with the Imo government.

In an interview with reporters in Gusau on Thursday, Shinkafi said her resignation does not have anything to do with politics or any other reason.

She said the speculations about her resignation on social media are “completely false”, adding that it is the work of mischief-makers.

Shinkafi said Governor Hope Uzodimma of Imo state, and his Zamfara counterpart, Bello Matawalle, who are both members of the All Progressives Congress (APC), have discussed the development.

According to Shinkafi, her relationship with Matawalle and his wife is cordial, adding that they were involved in her decision to move to Imo.

“I am immensely grateful to governor Bello Matawalle and his wife, hajiya Aisha Matawalle, for their kindness to me and for giving me the opportunity to serve Zamfara in different capacities.

“All the speculations on social media about my resignation are completely false; it was just the work of mischief-makers.

“I have a perfect and cordial relationship with the governor and his wife. I consider them as my family and they were in the picture of my going to Imo.

“Both governor Hope Uzodimma of Imo and Matawalle discussed it as fellow All Progressives Congress governors and as friends too.”