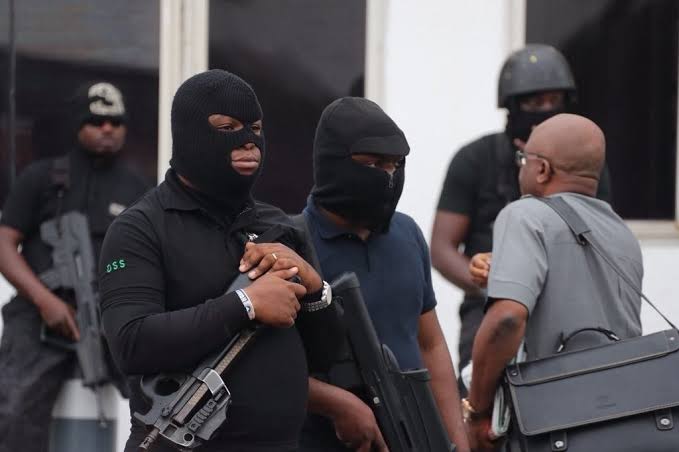 An Ekiti-based traditionalist, Dada Ifasooto, who was arrested for allegedly preparing charms for Yoruba Nation agitator, Sunday Adeyemo, aka Sunday Igboho has narrated his experience while in the custody of the Department of State Services (DSS).

The DSS had arrested and detained Ifasooto on July 16, 2021, some two weeks after the secret police stormed Igboho’s Ibadan residence in a Gestapo style, killing two of his aides and arresting 12 others.

After six months of detention, he was released on Friday. In an interview with Saturday Punch, Ifasooto explained that he was freed after the DSS found him innocent.

The traditionalist stated that he had never met Igboho but was arrested by the DSS and subjected to dehumanising conditions.

He also stated that he developed an ulcer and high blood pressure in DSS custody after three months.

According to him, during interrogation, the DSS official told him to disappear now that he is in handcuffs. Ifasooto said he replied that he couldn’t because he’s not a criminal.

“My name is Dada Ifasooto. I am 29 years old. I am a herbal medical practitioner and a traditionalist based in Ekiti. I inherited divination from my forefathers. I am also a youth volunteer and I do join vigilantes and Amotekun operatives to chase kidnappers from Ikere Ekiti.

“I have not met Sunday Igboho before but I have heard a lot about him in news reports of the Yoruba Nation rallies he attended in some South-West states before he was arrested. I have not met him personally.”

Explaining how his arrest came by, he stated, “There is a young man called Tajudeen (Irinloye) whom I have known for some time. He is a commercial motorcycle rider in Ibadan and he had come to me for treatment for an ailment. I called him thereafter to follow up on the treatment plan that I gave to him but unknown to me, he is an aide of Chief Igboho and the DSS had arrested him and some other aides during the widely-reported night raid of July 1, 2021.

“When I phoned him, his line rang out and he didn’t call back, which was strange to me. I never knew he was in the DSS custody. The next thing I saw was that on July 16, 2021, four fully-armed men in mufti stormed my sitting room in Ikere Ekiti around 6 pm.

“They scattered everywhere, asking me where my android phone was. After I gave them my phone, they told me I called a commercial motorcycle rider in Ibadan. They said he (Tajudeen) had been detained and they had come to arrest me.

“They searched my apartment asking if I had a gun but I told them I do not own one. I asked them to show me their search and arrest warrants but they could not provide any.

“They frisked the whole house and left the whole place in a mess but they didn’t find anything incriminating. They took some of my divination tools. One of the four men said they should start leaving but another fellow shut him up and insisted that they must arrest me.

“I told them I had not committed any offence to warrant being arrested. They were speaking the Yoruba language till that point but the four of them switched to the Hausa language immediately and discussed for minutes. I didn’t understand what they discussed afterwards because the language they spoke was Hausa.

“One of them ordered me to stand up and follow them to Ikere Police State, claiming that they were from the station. I told them that if truly they were from Ikere Police Station, the police officers there would have informed them that I am passionate about community policing in Ikere as I do join vigilantes and Amotekun operatives to chase out kidnappers and criminals.

“I insisted that I was not going to follow them but they said I only needed to come to the station to sign a document that nothing incriminating was found in my house after the search.

He added, “They didn’t take me to the police station but went straight to the DSS office in Ibadan. In Ibadan, I resisted them, saying I would not go in until they tell me my offence because I am an easygoing person. In fact, I have not attended any protest or rally before but they took off my clothes, left me with only boxers and pushed me into a cell.

“They were more than eight but only four of them entered my sitting room. They came with two Hilux vehicles and a motorcycle. They cocked their guns but they didn’t release any bullets.

“My wife was preparing dinner in the kitchen when they came that evening but she fled. I was the only one the DSS took away to their Ibadan office and I was the only detainee they drove to their Abuja office.

On July 18, 2021, which was a Sunday, very early that morning, the DSS operatives told me to freshen up and I did. They gave me back my clothes and handcuffed me.

“They told me I would be taken to Abuja and I told them again that I had not committed any offence by phoning someone who is my customer. They told me to cooperate, saying they were the ones that arrested my boss. I asked them which boss? They didn’t respond till we got to Abuja that same day.

“A DSS official interrogated me when I arrived in Abuja. He asked whether any herbalist followed those who came for my arrest and I told him I don’t know. The official then informed me that the same people who arrested my boss, Chief Sunday Igboho, who turned to cats, were the ones who also came for me.

“I told him Chief Sunday Igboho was not my boss and I had never met him before. He mockingly told me to disappear then that I had been handcuffed and I told him I don’t know what he was talking about. I told him I can’t vanish because I am not a criminal.

“He shut me up and locked me up. I was locked up for the first three months and nearly forgotten there. I was pained because I did not commit any offence and did not deserve the treatment.

“I was locked up with some Hausa/Fulani detainees accused of being Boko Haram members. We were 13 in the room.

“I was fed with a small loaf of bread and a tiny sachet of Cowbell as breakfast. They brought some colourless rice for lunch and so on.

“I was not beaten but the conditions I was subjected to were dehumanising. I couldn’t sleep in detention, and I developed so many ailments.”

According to him, the DSS told him his crime was having contact with Tajudeen, an aide to Igboho who had earlier been arrested.

Ifasooto said he was also accused of making charms for IPOB (Indigenous People of Biafra) but he denied it outright as he had never been in contact with the group.

Why Gana Did Not Disappear, What We Will Do Next – Gang Member Reveals

He said, “The DSS said I phoned Tajudeen and I explained to them that he is my customer. They asked for the meaning of my name and I told them that it was given to me by my grandfather who was also a diviner.

“After many months in detention, some DSS operatives asked that I be brought out for another interrogation. They asked me about the offence brought against me and I told them that I was accused of phoning Tajudeen.

“The operatives then ordered that Tajudeen’s file be brought out. They checked his file and all they found there was that Tajudeen said he gave me money as a trado-medical practitioner and I wanted to check up on him.

“They accused me of preparing charms for Chief Sunday Igboho, which is not true. I did not prepare any charm for him. I have not met him before. They also asked me whether I had been to Imo State and I said I had not been to Imo or anywhere in the South-East.

“The officers then accused me of making charms for IPOB (Indigenous People of Biafra) but I told them that was not true as I had never been in contact with them.

“I was eventually released on December 24, 2021, and the DSS operatives told me to be grateful to the lawyer and to their own investigation which showed that I am an innocent man.

“I was warned to be mindful of my activities going forward so as not to return to their custody. It is painful to be unjustly detained for six months but I thank God that I didn’t spend this year’s Christmas in DSS custody. The DSS should carry out proper investigation before arresting people.”