LATEST: Next Cash and Carry Supermarket Still On Fire After 24 Hours 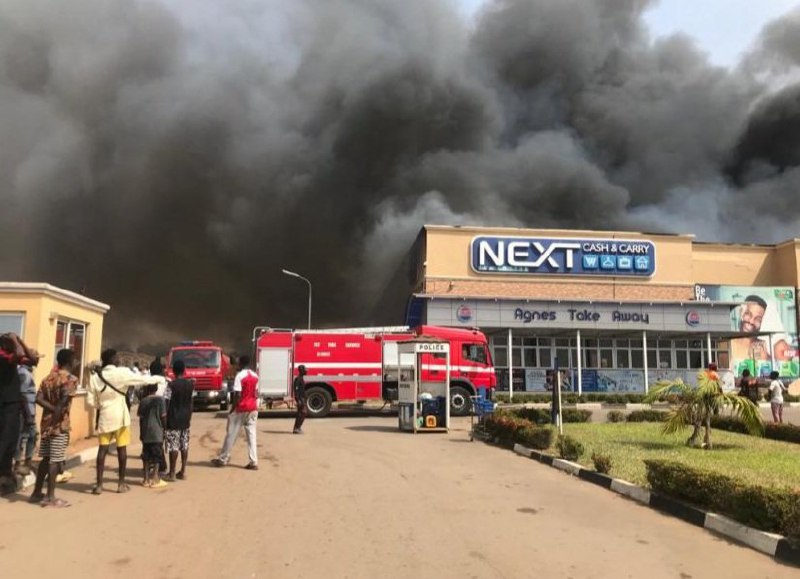 24 hours after a massive fire engulfed Next Cash and Carry Supermarket in the Jabi area of the Federal Capital Territory, firefighters are still struggling to completely put out the fire.

This as security operatives have denied journalists access to the premises of the razed Supermarket.

The supermarket which is one of the biggest in the territory according to some of the employees who spoke to journalists on Sunday the fire started around 8 am.

They also said the inferno was caused by an electrical surge which started from the administrative section of the supermarket.

The employees of the supermarket, however, accused personnel of the fire service of getting to the scene late.

The FCT Fire Service, Federal Fire Service, the fire units of the Nigerian Navy and Guards Brigade, and fire trucks from Julius Berger Plc tried, on Sunday, to extinguish the fire.

Reporters who are on the ground at the moment, reports that the fire was still raging and smokes have pervaded the area.

The firefighters were also seen trying to extinguish the fire.

Also, some portions of the supermarket have gone down due to the damage caused by the fire.

However, the Federal Capital Territory Police Command said it had arrested four suspects who attempted to steal from the supermarket on Sunday.

According to her, the suspects are currently at the Mabushi Divisional Police Station.

She said, “Security agencies were deployed to manage the situation, minimize damage, extinguish the inferno and ensure the maintenance of law and order.

“Suspects who made attempts to cart away goods from the store and were promptly arrested. They are: Ali Audu aged 18 Years; Yahaya Yunusa aged 20 Years; and Sahabi Abubakar aged 20 Years.”

She said an investigation is currently ongoing to ascertain the cause of the fire.