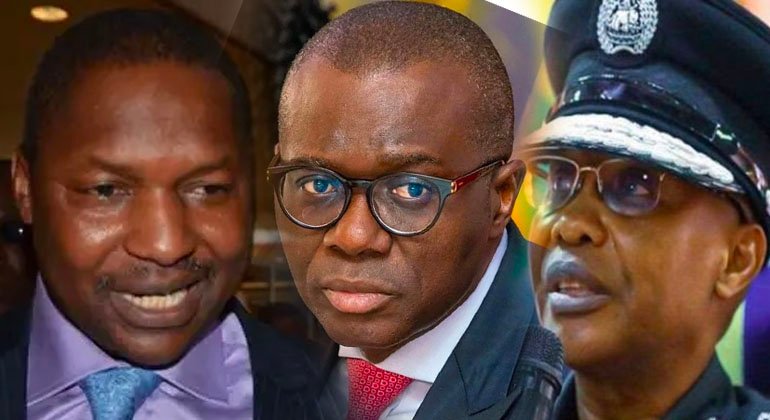 An unnamed Chief Superintendent of Police on Tuesday openly defied the order of the Lagos State Governor, Babajide Sanwo-Olu, to vacate the Magodo Phase 2 Estate area of the state.

The CSP told the governor that he and his armed colleagues were at the estate on the orders of the Inspector-General of Police, Usman Baba; as well as the Attorney General of the Federation, Abubakar Malami (SAN).

Sanwo-Olu had led members of his cabinet to visit the residents protesting the continuous presence of armed policemen in the estate.

For days, policemen besieged the estate in the company of suspected land grabbers and members of a family who had planned to demolish property in the choice estate to execute a Supreme Court judgment. The development has caused commotion at the estate as landlords and tenants panic over their fate.

The residents subsequently called on the governor to intervene and Sanwo-Olu visited the scene on Tuesday and told the leader of the police delegation that the land matter was a case between private individuals and the state government.

Sanwo-Olu said, “Can you call your superiors in Abuja and tell them that the governor is here and as the Chief Security Officer, you don’t have any business being in my state right now and that I want you to disengage right now?”

But the unnamed CSP replied, “I am here on the instruction of the Inspector General of Police through the AGF. I am too small or too low to call them. Your Excellency sir, you can call them sir.”

Asked of the number of policemen at the estate, the defiant leader of the police team told the governor, “My men are here; they are all over the place, I cannot precisely tell you how many we are. For security purpose, I cannot tell you the number.”

After many failed attempts, the governor, miffed, turned to journalists and declared the presence of the policemen as illegal, adding that he would make some calls to the IGP and the AGF.

A dissatisfied Sanwo-Olu said, “They (policemen) are not from the Lagos State Police Command. They said they are from Abuja. I don’t know what other interest they have beyond keeping the peace of the country. This is not an expectation that I expect from them because they don’t have any business here.”

Anaedoonline.ng had earlier reported that the 17 Southern governors in July 2021 resolved that security agencies must notify them as the chief security officers of their states before they carry out any operation within their individual domains but the Federal Government through the Nigeria Police Force, the Nigerian Army, the Department of State Services and other security agencies have continued to do otherwise.

The lack of control over security apparatus by governors had over the years fuelled the clamour for devolution of powers from federal to state governments as many governors including Sanwo-Olu, Nyesom Wike (Rivers), and other staunch proponents of restructuring believe that state policing would allow them have control over security agencies in their individual domains without interference from the government at the centre.