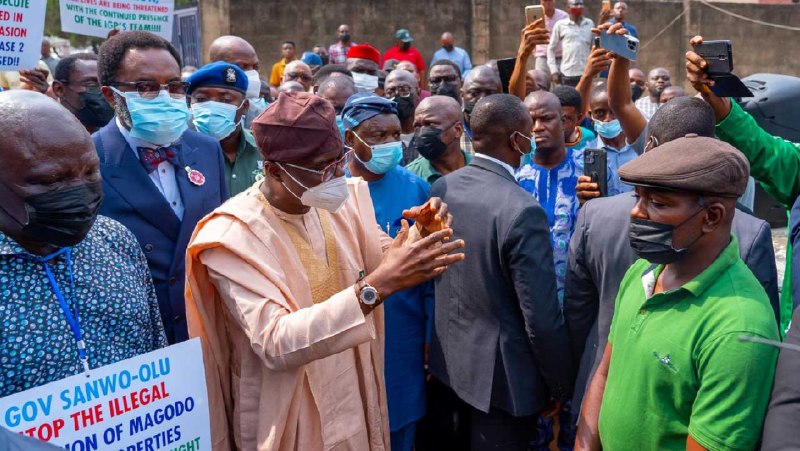 The South-West Governors’ Forum has frowned at the ‘disrespect’ displayed by a Chief Superintendent of Police, Abimbola Oyewole, who openly defied the order of the Lagos State Governor, Mr Babajide Sanwo-Olu, which required he and his men to vacate the Magodo Phase 2 Estate area of the state.

The incident which happened on Tuesday at the estate was captured in a video that went viral on social media.

The Chairman of the South-West Governors’ Forum and Governor of Ondo State, Rotimi Akeredolu, SAN, in a statement he personally signed, described the content of the video as disconcerting.

Akeredolu said the utter disrespect, which underlines the response of the officer to the Governor establishes, beyond doubt, the impracticability of the current system, dubiously christened “Federalism”.

It read, “We are in possession of a video which has gone viral on the social media concerning the disgraceful exchange between a police officer, a CSP, and the Governor of Lagos State, Mr Babajide Sanwoolu, the supposed Chief Security Officer of the State, at the Magodo Residential Estate.

“The content of the video is very disconcerting, and this is being charitable. The utter disrespect, which underlines the response of the officer to the Governor establishes, beyond doubt, the impracticability of the current system, dubiously christened “Federalism”. An arrangement, which compels the Governor of a State to seek clarifications on security issues in his jurisdiction from totally extraneous bodies or persons, is a sure recipe for anarchy.

“We condemn, very strongly, this brazen assault on decency. We call on the IG to explain the justification for this intrusion. This is not acceptable. Any expectations of rapprochement between so-called federating units and federal security agencies are becoming forlorn, progressively, due to deliberate acts which mock our very avowal to ethics and professionalism.

“We condemn, in very clear terms, the role of the Attorney General of the Federation, Mr Abubakar Malami SAN in this act of gross moral turpitude.

“We, on our part, will continue to interrogate the current system, which treats elected representatives of the people as mere prefects, while appointed office holders ride rough shod over them as Lords of the Manor. If the purported Chief Security Officers of the States of the Federation require clearance from the office of the IG on matters within their areas of jurisdictions, only hypocrites will wonder why the current security crisis deepens and there appears to be no solution in the foreseeable future.

“We stand by our brother, the Governor of Lagos State. We advise him to deploy the Regional security outfit in the State to protect the lives and property of the people.

“We call on the President and Commander-in-Chief of the armed forces to rein in the excesses of certain elements bent on acting in a manner capable of eroding the bond of trust existing between the people and the Federal Government. It is preposterous for political appointees to seek to undermine the very structure of service upon which their appointments rest.”

Sanwo-Olu was at the Magodo Phase 2 Estate area on Tuesday to calm residents who were protesting against the planned invasion and demolition of properties in the estate.

The estate management had ordered a closure of the estate gates in protest against the planned demolition.

Policemen numbering about 50 had recently accompanied suspected land grabbers and members of a family to invade the estate in order to claim possession of property.

During the invasion, the group used red, brown and blue inks to inscribe ‘ID/795/88 Possession Taken Today 21/12/21 by Court Order,’ on various properties in the estate.

The suspected land grabbers were said to have operated based on a judgment by the Supreme Court.

Addressing the protesters, the Governor assured residents that he had called for a meeting that will have representatives of the residents association, those of the suspected land grabbers and the police.

This is as he expressed the belief that the meeting which will hold today(Wednesday) at his office will resolve the issue on the ground.