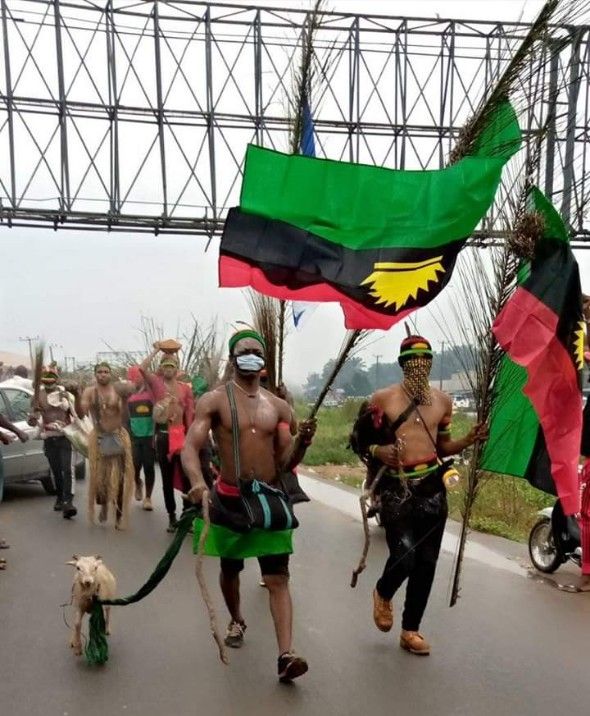 The people of the South-East has been advised to seek alternative means of protein ahead of its ban on beef from Fulani cattle, which will take effect from April by the Indigenous People of Biafra, IPOB.

IPOB gave the advice in a statement explaining its ban on beef from cattle brought by “terrorist Fulani-killers masquerading as herdsmen.”

In the statement, on Monday, IPOB explained that its proposed ban, in April, on beef in the South-East is not a declaration of war against the North, but rather a necessary step to stop unprovoked attacks by killer-herdsmen in the region.

IPOB made the explanation in a statement by its Media and Publicity Secretary, Emma Powerful entitled “Ban on cow meat in Biafra land, is no declaration of war against the North, but a necessary step to stop unprovoked attacks by Fulani herdsmen in Biafra land”.

The pro-Biafran group said it did not ban the eating of beef in South-East, but herdsmen bringing cow that destroys farms, rape and kill women and girls.

IPOB, however, noted that it was not threatened by the “rantings of a group of bigots who called for the boycott of all Igbo products in the North.”

They said the bigots’ action had further confirmed the belief that the atrocities of terrorist and rapists herdsmen in Biafra and other parts of Nigeria is a common agenda of the North.

While advising people from the region to be prepared for the ban, IPOB urged them to turn to poultry, goats and fish for protein.

IPOB said: “We want to encourage our people to be prepared for what is to come. Nobody should be taken unawares.

“Enough is enough! IPOB is ready to enforce this ban on people bringing cow meat.

“There are other alternatives to animal protein. We encourage our people to go into poultry farming, goat rearing and fish production.

“Nobody should dare violate this ban when it takes effect in April, as doing so amounts to testing the will of the people.”

IPOB’s statement read in part, “The attention of the global movement and family of the Indigenous People of Biafra, IPOB, ably led by our great leader Mazi Nnamdi Kanu, has been drawn to the latest ranting by a Fulani group of bigots against IPOB members and ESN operatives, including the entire people of Biafra living in the North.

‘We Did Not Ban Beef’ – IPOB Replies Northern Groups

“These irritants have called for the boycott of all Igbo products in the North as a retaliation for the proposed ban on those terrorist bringing cow meat in Biafra land with effect from April.”

The group stressed that “We did not ban cow meat but those bringing cows that were destroying our farms, those raping our mothers, wives and sisters in the farms.

“Biafrans can eat foreign beef, not the ones that can bring Fulani terrorists into our territories.

“This threat by these misguided northern groups who called themselves Northern Coalition Group, has further confirmed the belief that the atrocities of Fulani rapists herdsmen in Biafra and other parts of Nigeria is a common agenda of the North.

“Particularly the Fulani and their terrorists disguised as herdsmen and cattle rearers in all parts of Nigeria and Biafra.

“How come these hypocrites never threatened Fulani herdsmen as they invade communites and kill farmers in Biafra land without any provocation?

“Now that we have decided to boycott and ban cow meat brought by these terrorists-herdsmen, and instruct our people not to eat beef, Fulani are threatening us with war because they think we are vulnerable and weak to kill at random.

“We want to tell them that we are doing this so that we can have peace in our communities.

“The real sponsors of the ongoing genocide and numerous deaths in our land have surfaced.

“However, we are waiting for Fulani-terrorists to carry out their threat against Igbo traders and business interests in the North come April when the ban will take effect.

“They should remember and understand that the era of intimidation of Igbo people in Nigeria has gone.

“Nobody has the monopoly of anything anymore against our people; if they do they will regret their actions because days have gone for that rubbish.”