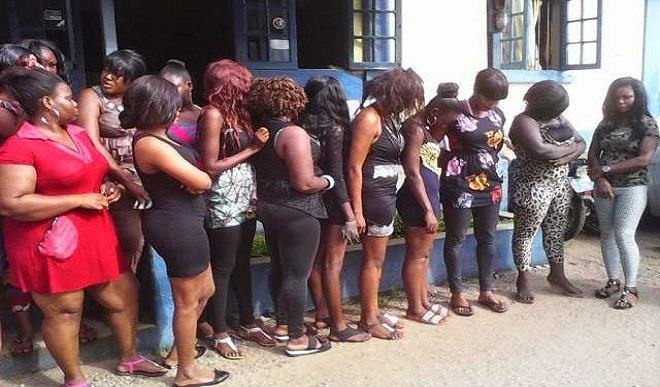 The police in the Upper East regional capital of Bolgatanga, Ghana have arrested 18 female Nigerians for allegedly engaging in prostitution on Monday.

Several Ghanaian media publications report that the ladies were arrested at Midnight Drinking Spot at Akolbila Bar in Atulbabisi, a brothel operated by a Ghanaian couple.

The Ghanaian couple, whose brothel was raided by the police and aged 32 and 39, were also arrested.

CNN: Paris park where Nigerian women are forced into prostitution

The names and ages of the arrested Nigerians were also published in Ghanaian media.

The police captured used condoms and tissues which were seen scattered in the corridors and rooms as evidence.

The suspects have already been arraigned at Bolgatanga District Court for keeping a brothel and trading in prostitution, acts forbidden under Ghanaian law.

They have been remanded in custody pending their next appearance on 13th January 2022, while Ghana’s immigration service is working to establish whether they have permits to stay in the country.