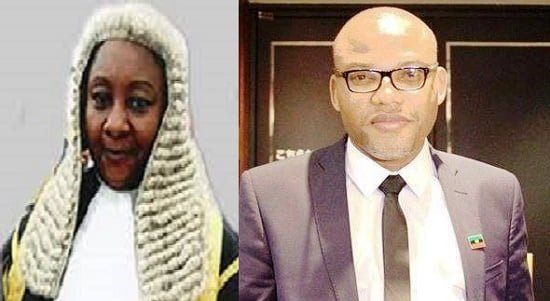 The Indigenous People of Biafra (IPOB) has accused Justice Binta Nyako of the Federal High Court for conspiring with the Department of State Services (DSS) to put its leader, Nnamdi Kanu, in solitary confinement.

The group reiterated that Kanu had not been convicted and as such should not be tortured with the solitary cell as “stipulated under Section 2 of the Anti-torture Act of 2017, which offence attracts 25 years imprisonment upon conviction.”

According to the group, Nyako has the judicial power to prevail upon the secret police to stop violating Kanu’s human rights but had decided to turn a blind eye.

IPOB, however, warned that both Nyako and the DSS will have themselves to blame if Kanu died in the custody of the secret police, stressing that his health was in critical condition.

In a statement by the Media and Publicity Secretary of the group, Emma Powerful, on Wednesday, IPOB said, “We the global family of the Indigenous People of Biafra ably led by our great and indefatigable leader Mazi Nnamdi Kanu, once again, wish to raise alarm over the continuous detention of Kanu in solitary confinement at the State Security Services headquarters Abuja.

“We have seen that the presiding judge handling this case, Hon. Justice Binta Nyako is an accomplice to the suffering of an innocent man who committed no crime known to law in Nigeria and the world.

“Binta Nyako refused to ensure that DSS oblige and respect the fundamental rights of Kanu as exactly provided.

‘We are watching her and DSS. If anything untoward happens to Kanu in DSS custody they will regret his rendition from Kenya to Nigeria. Our leader is being held in solitary confinement for 23 hours every day.

“We raise this alarm again to the public to tell the world that Justice Binta Nyako is giving a blind eye to the impunity of the DSS against our leader. A judge should be fair to all especially the accused who has not been convicted. Kanu should not be treated with brutality simply because he is an Igbo.

“The fact that all orders made by the court presided over by Justice Binta Nyako about the welfare and management of Mazi Nnamdi Kanu at the DSS dungeon were all flouted by the detaining authority and DSS, without being reprimanded or committed for contempt by the presiding judge Binta Nyako exposed herself to the world that she is serving the interests of Fulani, and not the interest of Nigeria. This has further exposed her vulnerability and bias in this matter.

“Solitary confinement of innocent person is a crime as stipulated under Section 2 of the Anti-torture Act of 2017, which offence attracts 25 years imprisonment upon conviction. One will begin to wonder why should a judge be a party to the commission of this heinous crime against Mazi Nnamdi Kanu and the entire race like Biafrans.

“It is no longer in controversy that Mazi Nnamdi Kanu is detained in solitary confinement where he is daily subjected to mental and emotional torture because of his belief for Biafra freedom and independence.

“We are calling on men and women of good conscience, Amnesty International, Human Rights Watch, intersociety and reputable human rights organisations across the globe to prevail on Nigeria government and the compromised security agencies particularly the DSS, as well as Justice Binta Nyako to release Nnamdi Kanu whose health condition needs urgent attention. He should not be allowed to die in detention as such this scenario will not be in the interest of anybody.”