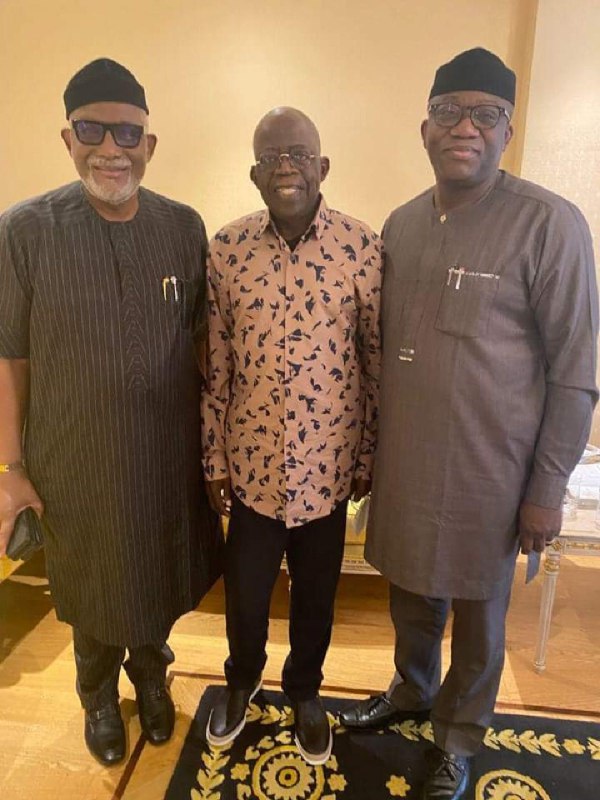 Governor Kayode Fayemi of Ekiti has reportedly met with the National Leader of the All Progressives Congress (APC), Bola Ahmed Tinubu, over the 2023 Presidential election.

Fayemi, who is the chairman of the Nigeria Governors Forum (NGF) also discussed the forthcoming APC governorship primary in Ekiti State with the former Lagos State governor.

This is coming few days after Tinubu had declared his intention to pursue his ‘life-long ambition’ of becoming President.

He had told State House correspondents after meeting with President Muhammadu Buhari on Monday that nothing ‘stops a kingmaker from becoming king’, adding that he is still consulting widely with stakeholders.

Top sources have now revealed to Newsmen that Fayemi, on Wednesday, had discussions with Tinubu over the latter’s Presidential ambition and the need to ensure that the South-West gets the APC Presidential ticket.

The politician stated that the Southwest APC may back a single candidate for the presidential primary in order to present a untied front.

“A lot is at stake in this APC governorship primary in Ekiti State. The Peoples Democratic Party is also very strong and the opposition will capitalise on any division in the APC. So, Fayemi came to see Tinubu in order to seek his support.

“Discussions on 2023 also took place with a view to presenting one South-West consensus. If the South-West is divided, the region could be denied the APC Presidential ticket. So, such consultations will continue,” he said.

The source said Fayemi and Tinubu’s relationship had become frosty in recent time due to Fayemi’s role in the sacking of the Adams Oshiomhole-led National Working Committee and his hobnobbing with the APC Caretaker Committee led by Governor Mai Mala Buni.

He recalled that the Ekiti governor had been accused of victimising Tinubu supporters under the aegis of the South West Agenda 2023 led by Senator Dayo Adeyeye and preventing them from holding processions in the state.