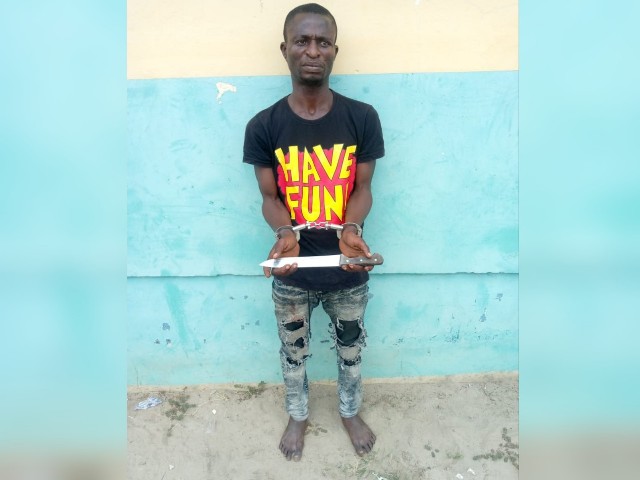 The police in Delta State have arrested a 26-year-old man, Paul Ogilo, for allegedly stabbing a 29-year-old father, Twere Shipiode, at Otu-jeremi community in Ughelli South LGA of the state on January 12.

A statement released by DSP Edafe Bright, spokesperson of the state police command, says the DPO in the area received a distress call that the suspect had stabbed the deceased to death. Edafe said upon receiving the tipoff, the DPO mobilized and led Police patrol teams to the scene where the lifeless body of the man was seen in a pool of his own blood and the house deserted.

The police spokesperson said investigations revealed that there was an altercation between the deceased and the suspect after the former found the latter in his house and accused him of attempting to defile his daughter.

Upon interrogation, the suspect admitted committing the dastardly act. He further stated that a fight ensued between him and the deceased after the deceased found him in his house and that the deceased accused him of attempting to defile his daughter.

He stated that during the fight, he used the kitchen knife to stab the suspect on the neck.”

29-Year-Old Suspect Confesses Why He Killed His Girlfriend

Edafe said the suspect was trailed to an uncompleted building in the area where he was arrested and the kitchen knife recovered.