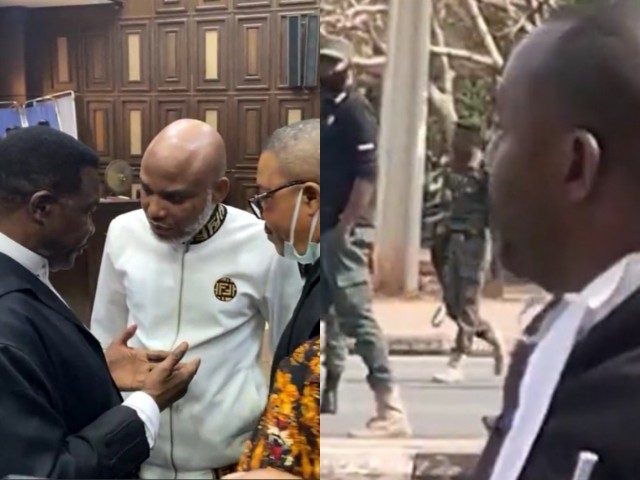 A lawyer has expressed regret for studying law in Nigeria after he was barred from court during the trial continuation of Nnamdi Kanu, the Leader of the Indigenous People Of Biafra, IPOB.

The trial of Kanu which held on Tuesday, Jan. 18, was again adjourned after he objected to the fresh charges brought against him by the Federal Government.

The Federal Government had filed fresh terrorism charges, increasing the initial seven counts bordering on treasonable felony and terrorism against him, to 15.

However, only the IPOB leader’s legal counsel led by Mike Ozekhome SAN, were allowed into the courtroom.

Security operatives barred other lawyers from accessing the court and they were made to wait outside in the scorching sun.

A video shared by former Chairman of NHRC, Chidi Odinkalu, showed some lawyers lashing out over double standards as anti- Kanu protesters were allowed to demonstrated within few meters of the High Court.

One of the lawyers could be heard expressing deep pain and regret over his decision to study law in the country because people in authority act with impunity.

Apparently, #Nigeria's security services choose to create a #SterileZone when Nnamdi Kanu goes to court. They don't even allow lawyers to enter the court. But they bus-in their chosen "protesters" within the zone….!?! pic.twitter.com/XUk6tRyYTd