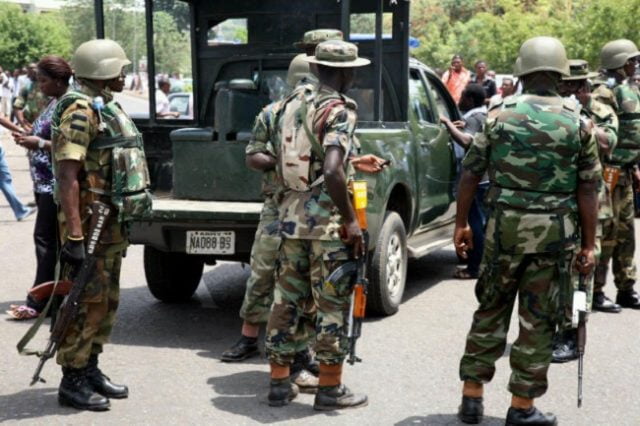 Counsel to the Nigerian Army, Amos Tony, on Wednesday said the military would respond to a court order directing it to compensate leader of the Indigenous People of Biafra, Nnamdi Kanu, with N1billion for violating his fundamental human rights.

Tony said the army would react accordingly after studying the judgment by Justice Benson Anya of the Abia High Court, Umuahia.

The court gave the judgment on Wednesday after condemning the army’s invasion of Kanu’s house in September 2017 during Operation Python Dance II.

The court also ordered the army and Nigerian Government to apologise to Kanu in three national dailies for the infringement of his fundamental human rights.

Justice Anya gave the order while delivering judgment on the suit filed by Kanu against government, the army and six others for allegedly violating his fundamental human rights.

Tony in his reaction said that he was waiting for a copy of the judgment, which he would transmit to his client, to study and determine the next line of action.

However, counsel to Kanu, Aloy Ejimakor, while hailing the judgment, said the ruling had proved that his client did not jump bail but only escaped out of Nigeria over threat to his life.

He said that “the judgment means that the bench warrant against Kanu in Abuja court has to be vacated”.

On the court’s failure to abdicate on the issue of Kanu’s rendition for lack of jurisdiction, Ejimakor said the legal team would consider other options after careful study of the judgment.

Meanwhile, Chairman of Conference of Nigeria Political Parties, Ugochinyere Ikenga, urged President Muhammadu Buhari to heed the advice of the court, Igbo elders and other eminent Nigerians to embrace dialogue and political solution in Kanu’s matter.

He called for the immediate release of the IPOB leader, arguing that if government could grant amnesty to bandits, it should not be reluctant to do same to a freedom fighter.

Reacting to the development, leader of the Movement for the Sovereign State of Biafra, Mr Uchenna Madu, applauded the judgment but said it looked like it had a dictation of the powers from above as some of Kanu’s prayers were turned down.

He said no amount of intimidation or persecution would suppress the agitation for Biafra.