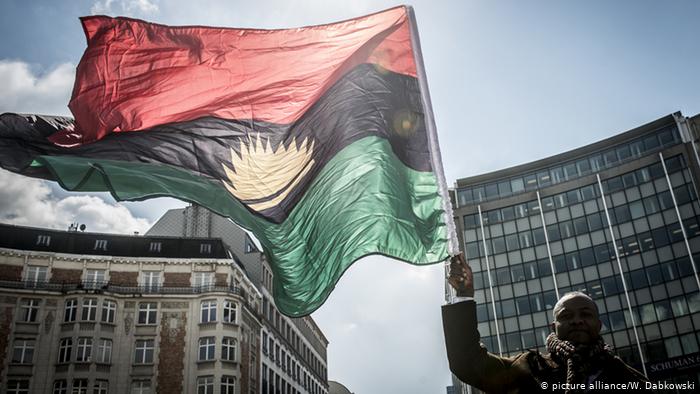 The Indigenous People of Biafra (IPOB) has vowed to continue its agitation for the creation of a sovereign state of Biafra.

The group has however given the federal government of Nigeria a single condition that can make it suspend the agitation for Biafra.

A statement on Thursday by the IPOB publicity secretary, Emma Powerful stated that the only thing that can stop the agitation for Biafra is for the government to announce a date to conduct a referendum.

He stated this as part of the reaction to Tuesday’s court order from Justice Benson Anya of the Federal High Court in Umuahia which directed the Federal Government and the Nigeria Army to pay N1billion to the leader of the Indigenous People of Biafra (IPOB), Nnamdi Kanu.

The presiding judge ruled that the fine was for invading the IPOB leader’s house in September 2017.

Justice Anya also directed the government and the Army to apologize to Kanu for the violation of his Fundamental Rights and the illegal invasion of his home.

According to the spokesperson of the separatist group, “The recent trump-up charges preferred against our leader Mazi Nnamdi are another indication that NIGERIA has nothing against him.”

“The best thing for the Nigerian government and its security is to release our leader Mazi Nnamdi KANU unconditionally and redeem their image across the world because the world is watching what is going on in Nigeria.

“NIGERIA should give us a date for a referendum to ascertain whether or not our people want to continue with the so-called One NIGERIA.

“The only thing that can stop the agitation is the date for a referendum on the freedom for the people of Biafra. We will continue to win NIGERIA in every court,” he stated.