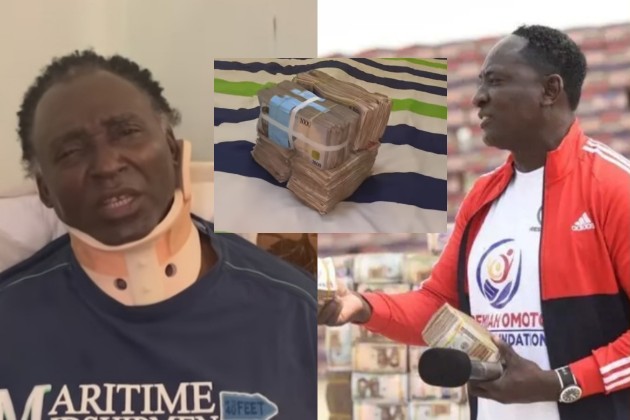 Fufeyin, founder and senior prophet of Christ MercyLand Church located in Warri Delta State, who had gifted the veteran actor N8 million for surgical operation visited him after his surgery.

Reportedly, Ohameze, a veteran actor, known for his many roles in Nollywood movies had been confined to sick bed for almost two years.

The thespian was involved in an accident, which had damaged his lower and upper limbs pushing him to take to the internet in search for financial assistance.

The prophet, whose attention was called to the development immediately offered the actor N8 million for payment of the bill.

On completing the operation, the prophet yesterday paid the actor a visiting providing additional N1.5 million.

The prophet, who prayed for the actor noted that it was necessary to ensure that he recovered fully and receive needed attention.

While initially providing the N8 million, Fufeyin had said: “When I look at the situation of the man I was weeping inwardly. People said he needs prayer. We all need to pray for him.”

Reacting to the gesture, Ohameze who was in shock described the prophet as a true man of God who places humanity first.