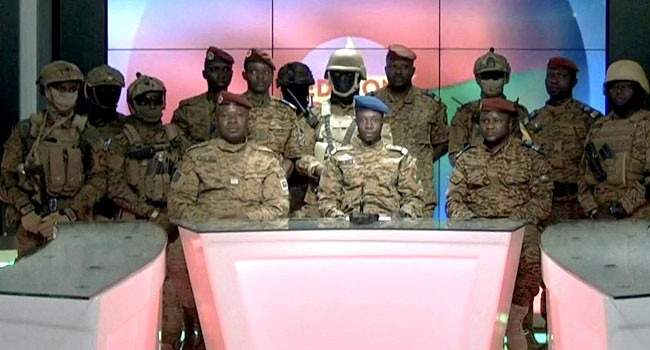 More than a dozen mutinous soldiers on Monday January 24, announced that a military junta now controls Burkina Faso after they detained the democratically elected president following a day of gunbattle in the capital.

A junior officer announced the suspension of the constitution, the dissolution of the government and parliament, and the closure of the country’s borders from midnight Monday, reading from a statement signed by Lieutenant Colonel Paul-Henri Sandaogo Damiba.

Announcing that a new Patriotic Movement for Preservation and Restoration (MPSR) would re-establish “constitutional order” within a “reasonable time”, the soldiers blamed the takeover on the civilian president’s failure to contain an Islamist insurgency.

They also announced that a nationwide nightly curfew would be enforced. The soldiers said the takeover was carried out without violence and those detained were in a secure location.

The statement read; “MPSR, which includes all sections of the army, has decided to end President Kaboré’s post today.

Kabore has been in power since 2015 and reelected in 2020 on a pledge to prioritize the fight against the insurgency. He has faced rising public anger over his failure to stop the bloodshed in the poor, landlocked country.

On Monday, the People’s Movement for Progress ruling party said Kabore was the victim of an “aborted assassination attempt”. A government minister, who was not named, also survived an attempt on his life and the president’s home was ransacked, it added.

The party said the presidential palace had been “encircled” by “a group of armed and masked men” and the national radio and television “occupied”.